Oil, gasoline, diesel and renewable fuels markets have started 2020 off with a bang.

Here are 20 price-influencing factors identified by OPIS experts and those of our parent company, IHS Markit, that stand to sway the markets this year and beyond.

Refined product demand is growing, and crude supply is relatively ample. But trade disputes and geopolitical volatility continue to lurk and it seems increasingly likely that the 2020s will represent an inflection point for the oil industry. 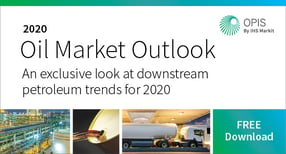