Growth will continue. OPIS PointLogic is forecasting that exports will rise to 4.6 Bcf/d this year. And yet, Mexico holds much more potential as a natural gas destination than the current exports are providing.

What’s holding it back? Infrastructure.

A number of factors have opened new opportunities for U.S. gas to expand its market share. Mexico for several years has been engaged in important energy reforms. Bringing in outside investment is essential for the country, as its own gas production has stalled while its demand for power is booming.

The gap between the country’s natural gas demand and production is stark. Domestic gas production in Mexico was 3.1 Bcf/d in 2017, according to data from IHS Markit and Mexico’s national energy ministry SENER. This represents a decline of nearly 1.8 Bcf/d since 2010. Yet, natural gas demand in 2017 was nearly 8 Bcf/d.

Natural gas imports from the United States have filled much of the gap. After accounting for as little as 15% of Mexican gas demand back in 2008 (note the purple dash line, right axis, in the chart below), they have surged to more than 50% of Mexico’s natural gas supplies last year.

With power demand in Mexico growing at 3% per year, the country’s need for gas will rise further. In a report in 2017, SENER said that that through 2020 about 60% of all electric capacity additions will be fueled by natural gas. It also projects that between 2016 and 2029 gas-fired capacity additions will amount to 24.9 gigawatts, with more than half of that growth occurring through 2020. Translated to gas demand, SENER projects demand from the power sector will grow from 3.6 Bcf/d in 2015 to 5.4 Bcf/d in 2029. 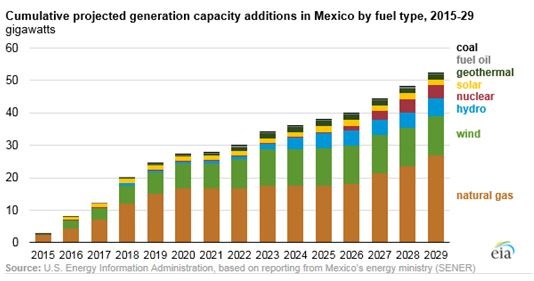 Where Is U.S. Natural Gas Supply to Mexico Coming From?

Mexico’s energy reforms are another positive part of the equation. As of spring 2018, the United States has piped about 4.3 Bcf/d across the border to Mexico, a 0.3 Bcf/d increase from the same period last year. Nearly 3.7 Bcf/d, or 85% of all exports, exit via Texas. The remainder departs the United States via Arizona and California.

Looking more closely, we see that nearly 3.3 Bcf/d, or 76%, comes from South Texas. Some of that gas comes from the nearby Eagle Ford basin. But a great deal comes from a mixture of inbound supplies from the Mid-continent and the Northeast on the growing network of pipelines designed to move record U.S. gas production to growth markets.

The other primary Texas source providing gas to Mexico is the Permian Basin in West Texas. Permian gas flows to Mexico from Texas and also through Arizona. 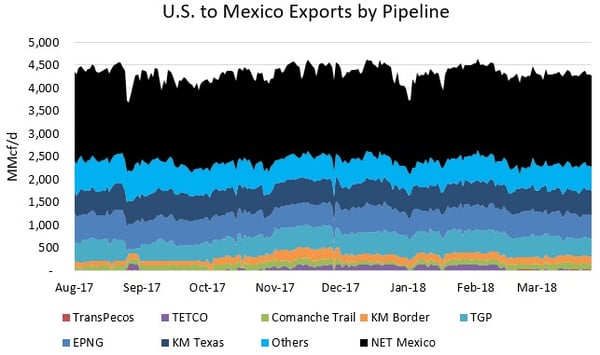 Not all pipelines are created equal, meaning that some carry a heavier load of the export activity than others. As previously mentioned, the majority of export gas to Mexico comes through Texas, but on a pipeline capacity perspective the Lone Star State is only about 45% utilized as a whole.

Pipelines like NET Mexico and Kinder Morgan Texas are running at over 90% and 80% utilization, respectively. On the other end of the spectrum, Comanche Trail and TransPecos have extremely low utilization rates of 10% and <1%, respectively. And there’s the problem: Those pipelines are waiting for pipeline build-outs downstream in Mexico and the materialization of Mexican gas demand.

While it’s clear that natural gas demand in Mexico is growing and that the U.S. is well-positioned to meet the country’s needs, the outlook is cloudy in some respects. The largest unknown is how quickly Mexico’s demand will increase, and whether the necessary gas pipeline infrastructure will be in place to serve the new demand.

Hernandez said that CFE is investing $15 billion in power production and its power grid, in addition to the tens of billions of dollars that Mexican and non-Mexican gas pipeline operators are investing in the gas infrastructure. The question is, when will these investments result in actual operational pipeline capacity?

OPIS PointLogic and IHS Markit track the progress of Mexico’s gas pipeline projects, and we see a busy 2018 on the horizon. About 6.5 Bcf/d of Mexican pipeline projects are in the works. Of that total, only 0.5 Bcf/d is directly connected to the U.S. border via the Nueva Era Pipeline system, and the rest is within Mexico.

The other 6.0 Bcf/d of 2018 Mexican pipeline projects that could enter service this year are mostly scheduled for the fourth quarter and involve bridging the gaps between connecting pipelines within Mexico. This will help reduce bottlenecks in central and southern Mexico and will allow Permian gas to reach farther south, such as to Guadalajara.

By late 2018, or more likely early 2019, one combination of U.S.-based and Mexican pipelines will add 2.6 Bcf/d of capacity to the western coast of Mexico.

The bottom line is that the demand growth story for Mexico will be gradual, just like the objectives of the country’s energy reforms, and much of the capacity being built today will not be highly utilized for many years to come.

At OPIS PointLogic, we remain optimistic about Mexico. If Mexico’s power and industrial growth forecasts are realized, IHS Markit forecasts that U.S. gas exports by the end of the decade could reach 6.0 Bcf/d in some months and annually reach that mark by the first half of the 2020s.