The U.S. West Coast spot gasoline and diesel market is no stranger to dramatic price increases. But, what uniquely makes this market tick?

Because of distinctive market fundamentals and limited refinery players, the West Coast region has a relatively lean trading network compared to other spot markets. That lack of market liquidity can lead to violent price moves, like the one that took retail gasoline prices north of $4/gal in spring 2019.

Due to geographic isolation, in terms of oil and refined product pipelines, the U.S. West Coast has limited resupply options.

To begin with, a limited pipeline network within the borders of the West Coast market can lead to sluggish resupply during outage periods, i.e., there is only one major line source in each of the Los Angeles, San Francisco and Pacific Northwest regions.

Recent history highlights how this can become problematic. There are 10 major refineries in California, each of which produce at least 75,000 barrels of fuel a day. This spring, six of those facilities had process unit upsets, planned turnaround maintenance – or both. Resupply became a thorny issue and gasoline prices spiked from the refinery gate to the retail pump.

Is there a supply cavalry from outside the region? Not really.

With the exceptions of parts of Arizona and Nevada, there is no pipeline access to bring gasoline, diesel and jet fuel from east of the Rockies into the West Coast.

That means that during times of refinery outages or other supply shortages, the market relies on waterborne imports to replace in-region fuel production.

But, there is no Amazon Prime 2-day delivery for oil! Resupply from outside the West Coast via tanker is far from immediate, taking about three weeks from the U.S, East Coast and Asia, and four weeks from Europe.

In addition, some West Coast refiners, particularly those in the Pacific Northwest, have commitments to export fuels to Mexico and Western Canada, which then pulls barrels from local fuel supply.

Also, in this heavily trafficked coastal region, marine vessels are already highly utilized. That means there is very limited additional capacity to increase shipments during times of supply disruption. 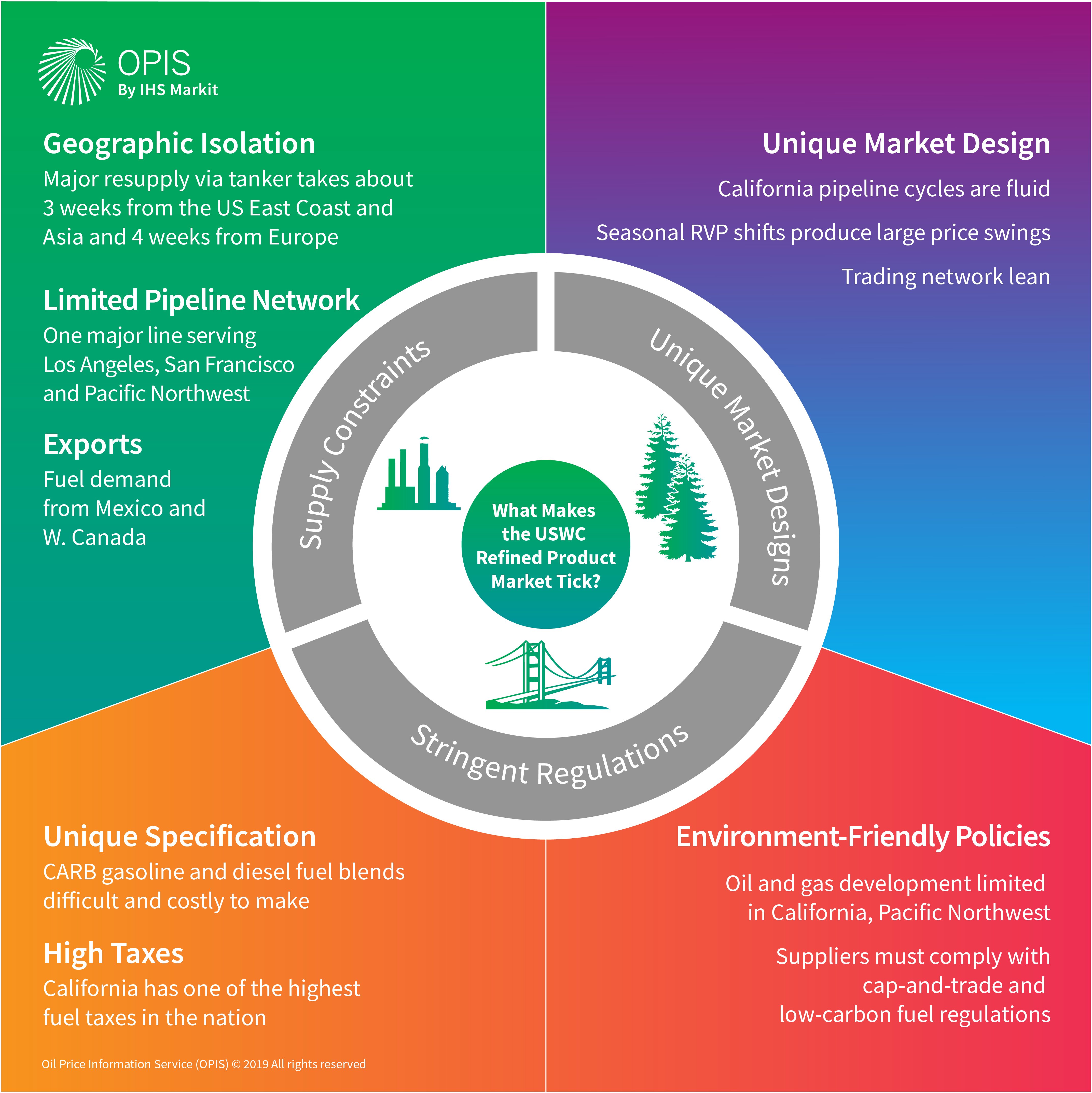 2. There Are Stringent Regulations and Added Costs for California's Gas and Diesel

The California Air Resource Board (CARB) has set some of the highest standards globally in an effort to protect the environment by controlling emissions from fuels.

The fuel that is sold in California represents a “boutique” blend that meets these stringent environmental regulations. And that specialized blend carries a higher underlying cost than gasoline in other regions.

In addition, suppliers in most of the U.S. West Coast states must pay additional costs to comply with low-carbon fuel regulations and programs to cap carbon emissions.

The super-clean CARB gasoline and diesel fuel blends are not only difficult and costly to make, only a limited number of refineries outside of PADD5 can manufacture these unique specifications. Add that to the infrastructure limitations mentioned above and resupply can get ugly (and costly) fast.

Tough regulations also limit oil development in California and the Pacific Northwest, which forces refiners to haul in crude oil from other states – another supply hurdle.

There’s one last element that makes fuel costly out West: taxes. West Coast states, led by California, have some of the highest transportation fuel taxes in the United States.

As we mentioned, the pipeline system serving the U.S. West Coast spot gasoline and distillate market is rather sparse.

Meanwhile, the schedules that dictate trading on that system, Kinder Morgan, are unique and often shape the movement of prices.

Oil products can be shipped each month during one of Kinder Morgan’s four active pipeline cycles. In Los Angeles and San Francisco, near-term and forward-timing assessments reflect “any month, buyer’s option” timing, meaning a buyer has the option to take delivery in any of those cycles – based on pump dates Kinder Morgan sets.

However, those Kinder Morgan pump dates are often subject to changes and they vary from one year to another, adding a layer of unpredictability for the market.

To keep confusion to a minimum, OPIS, as the benchmark for U.S. West Coast fuel pricing, works closely with Kinder Morgan to pinpoint the timing of its pipeline shipping cycles, and then promptly communicates to market participants the latest trade freezes and cycle roll schedules. That way everyone can be on the same page!

The West Coast gasoline markets, like many other jurisdictions, require a cleaner, but pricier, lower RVP (Reid Vapor Pressure) specification for gasoline in the spring and summer.

During this free webinar, OPIS editors will walk you through the market stressors that impact price volatility.

After listening you will: