On Jan. 1, the U.S. Environmental Protection Agency (EPA) Fuels Regulatory Streamlining Rule went into effect, and while some impacts are already being felt in east of the Rockies markets, others are on the horizon as gasoline markets continue to transition to summer gasoline specifications.

With this regulatory shift, test methods for reformulated gasoline (RFG) – the gasoline made by blending RBOB with ethanol – were simplified. Instead of the previous “complex model,” in which rigid “VOC-controlled” gasoline parameters had to be met during summer Reid Vapor Pressure (RVP) months, RBOB testing now is focused primarily on benzene, sulfur and RVP specifications.

The use of RFG accounts for roughly one third of gasoline sold in the U.S., according to IHS Markit’s PADD 1 Downstream Profile for January 2021. In PADD1 (the U.S. East Coast), it is required in Connecticut, Delaware, Massachusetts, New Jersey, Rhode Island, the District of Columbia, and the more populous counties of Maine, Maryland, New Hampshire, New York, Pennsylvania and Virginia. IHS Markit is the parent company of OPIS.

The results of this regulatory shift will affect U.S. Gulf Coast, Midwest and East Coast gasoline markets, with Chicago and some Texas markets using RFG in addition to those East Coast locations.

One of the most prominent changes is a shift in RVP specifications, with 7.4-lb. RVP as the new limit for summer-grade RFG gasoline, reflected in the summer-grade specifications for the U.S. Gulf Coast, New York Harbor barge and cargo, Buckeye Pipeline, Linden Junction, Boston cargo and Chicago gasoline spot markets.

More broadly, this shift is expected to make RBOB easier to manufacture at refineries, import terminals and blending hubs. Likewise, the new regulations may also make recertification of gasoline easier.

With this, product flows in the eastern half of the U.S. have begun to see impacts. Colonial Pipeline, a major transporter of gasoline originating in Pasadena, Texas, and terminating in Linden, New Jersey, has not adjusted the product grades being shipped, including regular and premium grades of RBOB, CBOB and conventional gasoline, and those grades are not being commingled. However, Colonial Pipeline has adjusted summer-grade RVP specifications and will also allow for some regrades: RBOB can be regraded to the same CBOB RVP number, while CBOB will only be regraded to a higher-RVP number.

This streamlining of rules also appears likely to make imports to the U.S. East Coast more attractive. In the past, even when the arb was “open,” there was a risk in sending gasoline to the region, due to the rigid standards which needed to be met. Additionally, because the East Coast has continued to see relatively strong prices, Atlantic Basin shippers have continued to send barrels to the region throughout the COVID-19 pandemic.

Gasoline imports to PADD1 (the U.S. East Coast) have averaged 452,000 b/d in the first 10 weeks of 2021, compared to about 441,000 b/d during the same time frame in 2020, according to the U.S. Energy Information Administration (EIA). That comes even as Renewable Identification Number (RIN) prices jumped sharply higher, with the OPIS Renewable Volume Obligation (RVO) approaching 16cts/gal as of the second week of March, its highest level in the 13-year history of OPIS RINs assessments. Normally, high RINs and RVO costs are a disincentive to imports. Lost production in the U.S. Gulf Coast following freezing temperatures there in mid-February was also appearing to provide an incentive for imports to the U.S. East Coast. The Gulf Coast is a key provider of gasoline to the East Coast. 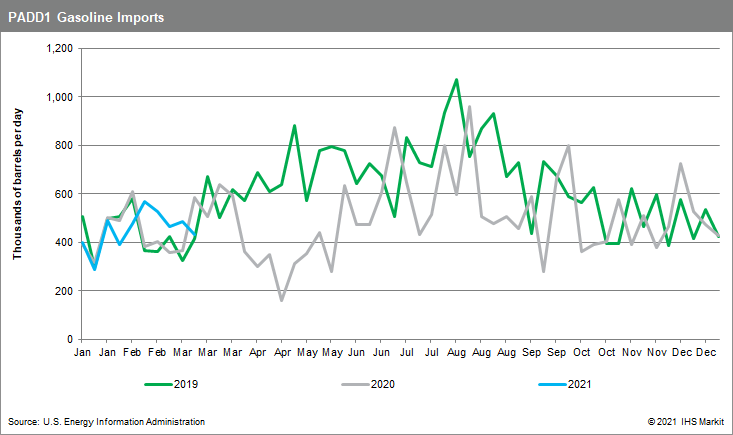 The RFG regulatory shift has also started to impact blending dynamics in the U.S. Gulf Coast and East Coast.

Under the new rule, with the aromatics penalty likely no longer a key factor, reformate has appeared to become more attractive, with alkylate less desirable for RBOB blenders. OPIS has heard of a couple instances of reformate being shipped from the U.S. East Coast to PADD3 (U.S. Gulf Coast) for blending. That movement of high-octane components goes against normal expectations but could be seen more frequently going forward.

Meanwhile, that less-desirable alkylate could potentially lower octane costs. Amid demand destruction from the pandemic, the extent to which octanes have been impacted by this new dynamic in particular is still to be determined. As of the second week in March, barge premium RBOB in the New York Harbor was running about 9cts/gal above its regular-grade counterpart. So far, in 2021, barge premium RBOB has averaged approximately 10cts/gal stronger than regular-grade RBOB. For comparison, that differential was closer to 11.5cts/gal in 2020, and more than 21.5cts/gal in 2019, prior to the COVID-19 pandemic’s impacts on the market. 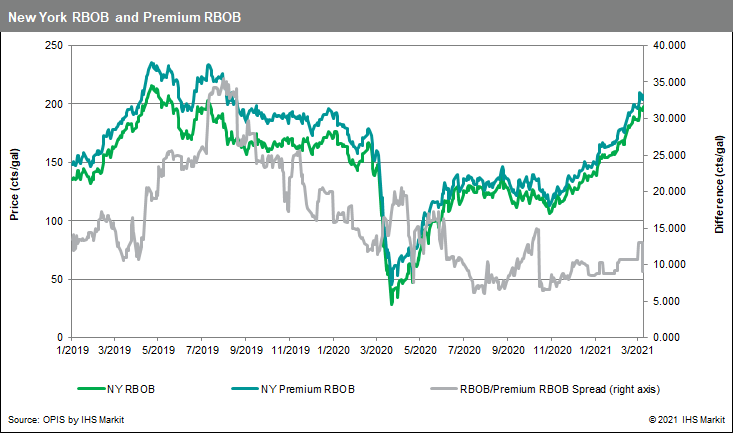 Looking ahead to the summer months, the RVP transition is expected to bring regular-grade RBOB spot prices in line with regular-grade CBOB prices in the U.S. Northeast, similar to the dynamic that is already seen during winter months. With the shift to tradable summer-grade RVP specifications not scheduled to take place until mid-April, the pricing dynamic remains uncertain.

In the U.S. Gulf Coast, however, the summer-grade RVP shift has already taken place. 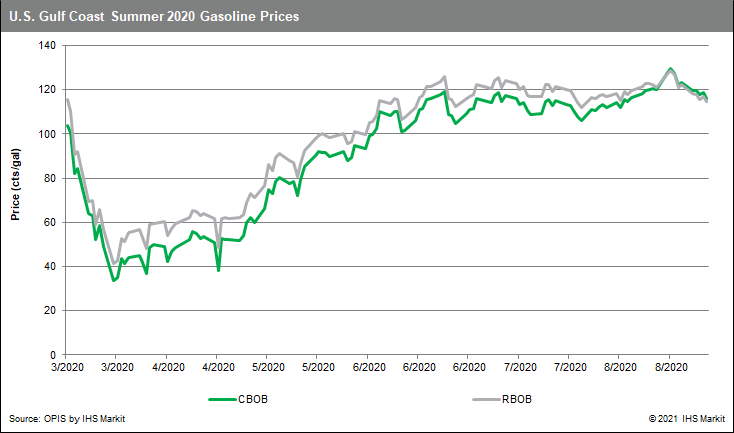 In the U.S. Gulf Coast, prices have responded to the higher RVP specifications for summer-grade RBOB. With trading transitioning to the 7.4-lb. RVP limit in early March, RBOB has emerged as the most expensive of the regular grades of gasoline. Gulf Coast CBOB and unleaded maintained their historical summer specifications of 9-lb. RVP as RBOB shifted to the lower limit this year.

The spread between Gulf Coast RBOB and CBOB narrowed to a penny ahead of the shift when both products carried RVPs of 11.5-lb. Less than a week later, when RBOB transitioned to the new 7.4-lb. RVP specification and CBOB changed to its traditional summer-grade 9-lb. RVP level, that premium for RBOB over CBOB reached 7cts, a wider spread than traditional calculations of RVP values might suggest.

The new RVP specification may be easier to produce at refineries than the complex model of the VOC-controlled RBOB, but the shift to the 7.4-lb. grade comes at a complicated time for the nation’s refinery hub of the Gulf Coast.

Gulf Coast (PADD3) refinery rates sank to their lowest level on record ahead of the change, with EIA data showing runs dropping well below 50% operating levels in the aftermath of February winter storms that disrupted operations at refineries representing more than 5 million b/d of capacity. IHS Markit anticipates a return to regular operations by the middle of the month, but the sharp impacts on production with a less severe effect on demand generated large pulls on gasoline inventories. 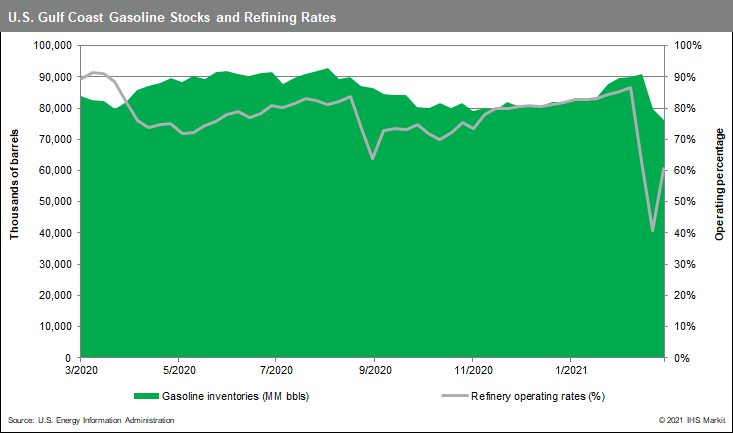 Looking to paper markets, NYMEX RBOB futures – with a delivery point in New York Harbor – have also seen an impact ahead of the transition to summer RVP specifications.

In past years, April RBOB futures – representing summer gasoline – commonly traded more than 20cts/gal above the winter-specification March contract. This year, that spread narrowed, amid expectations that the transition from winter to summer specifications would not be as challenging under the new RFG rules. Reduced gasoline demand due to the COVID-19 pandemic also appeared to be putting pressure on that futures spread. During the month of February, that spread averaged below 10cts/gal, and by month’s end the March RBOB contract expired about 7.5cts/gal below April RBOB futures.

Further downstream, wholesale racks have not seen a significant impact from the recent RFG standards change, with posters not distinguishing between conventional E10 using RBOB or CBOB. OPIS notes that, during the summer months, while RVP requirements will be adjusted as discussed, OPIS rack customers will not see a difference in how their prices are displayed in rack reports.

Download this handy OPIS infographic to help you understand the annual switch to Low RVP fuel. It will help you keep track of how and when OPIS handles RVP changes at the rack, along with a map identifying key regions.

Benchmark trades all session long with a full-day view of East of the Rockies spot fuel markets. 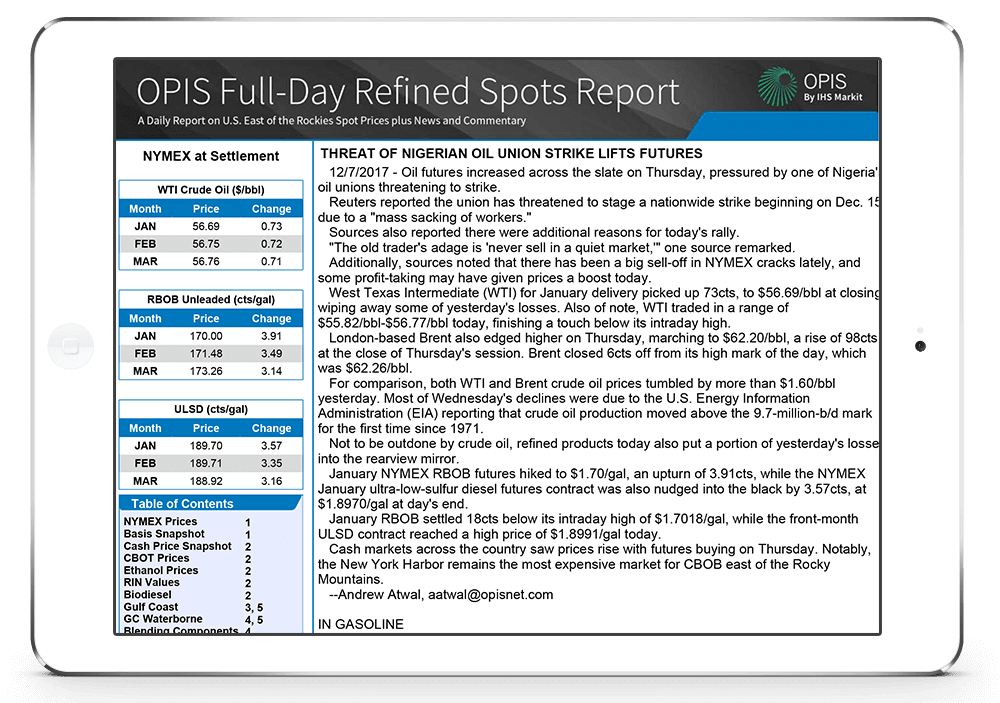 We take our cues from the market and follow it as it trades so you have complete transparency and a reliable benchmarking tool. Start your free 10-day trial!