Despite a pullback in recent years in the number of players working the U.S. Gulf Coast offshore bunker business, the offshore bunker segment so far this year appears to represent nearly a half-billion dollars’ worth of business while moving more than 4 million barrels of product.

For five companies that stand strong in the space, the totals represent a healthy revenue stream and a hefty amount of product moved, but has come with a ride in a volatile market and outlasting major global commodity traders with deep pockets.

The offshore business in recent years included major global commodity houses and suppliers in the region jumping on the opportunity. At one point, there were more than seven tankers and companies at one time offering in the U.S. Gulf Coast. A market participant chalked that expansion to suppliers looking for margins in a very competitive market, particularly at a time when tanker rates were low.

However, industry observers note the offshore Gulf of Mexico bunker market presents thin margins that at most times can safely support around three to five players in the region and make it profitable. The addition of two or three more players in the region puts heavy pressure on profit margins for everyone.

Fast forward to the present, the USGC offshore business has been whittled down to a combination of five main players: Bunker One using the Furuholmen tanker; Chevron/Hartree using the Storholmen tanker; Stone Oil using their Gulf Venture ATB; Trafigura using Bluefin tanker; and Vitol using the Brentholmen tanker.

Nowadays, vessels opting to fill up offshore for very low-sulfur fuel oil are estimated to pay a premium of roughly $60-70 per metric ton above the onshore bunker prices and marine gasoil is about estimated at a $100/mt premium.

The total market so far this year represents close to a half of billion dollars in value of various products, according to PIERS U.S. Customs data.

So far this year, each company in the offshore business have been able to perform anywhere from seven to 31 ship-to-ship bunker operations each month with an average of about 17 operations being performed each month, according to MINT ship tracking data.

In total, the number of ship-to-ship operations performed by the offshore bunker tankers was about 805 (see chart). 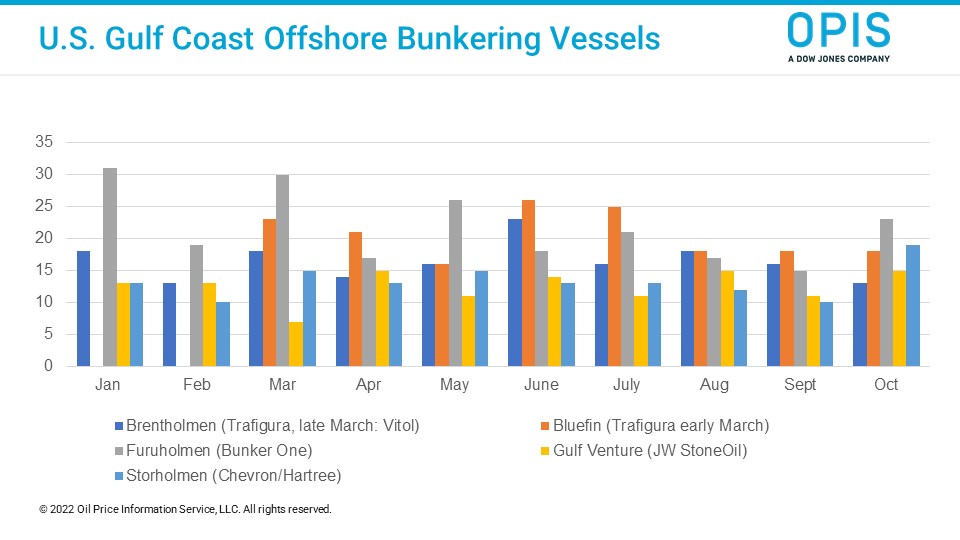 Year to date, The Furuholmen tanker performed roughly 217 offshore bunker operations. PIERS data showed the tanker moved about 1.07 million bbl of VLSFO to the Gulf of Mexico from USGC with estimated value of about $135 million.

The Storholmen tanker performed about 133 offshore bunker operations and moved roughly 676,250-bbl of various product to Gulf of Mexico from Houston with an estimated value of $81.5 million.

Bluefin tanker did about 165 bunker operations and transported close to 1 million bbl of products, which included high-sulfur fuel oil (HSFO), MGO and VLSFO, to the Gulf of Mexico from USGC locations with an estimated value of about $140 million.

The Brentholmen performed about 165 bunker operations and moved roughly 960,000-bbl of various products to the Gulf of Mexico from USGC, with an estimated value of over $124 million.

The Gulf Venture ATB performed roughly 125 bunker operations to date. However, PIERS data was not available for the Gulf Venture.