The U.K. government aims to attract private investment of 4 billion British pounds sterling ($5.51 billion) in blue and green hydrogen production, distribution, storage and consumption, primarily in the nation's industrial heartlands, via plans outlined in its much-awaited and much-delayed Hydrogen Strategy.

The crux of the blueprint is to "learn by doing" during the embryonic 2020s, with potential for rapid expansion post-2030.

In 2020, Prime Minister Boris Johnson announced the ambition to enable 5 gigawatts (GW) of low-carbon hydrogen generation capacity by 2030, but Whitehall had delayed publishing a strategy to accomplish this because of disputes surrounding the nascent technology among industry stakeholders.

After committing an initial sum of 500 million pounds to the hydrogen sector via 2020’s Ten Point Plan, the newly-published Hydrogen Strategy now estimates the sector will create 9,000 jobs, be worth 900 million pounds and attract 4 billion pounds of private investment by 2030 in its best-case scenario.

"Before hydrogen for heating can be considered as a potential option to decarbonise heat in buildings, we need to generate further evidence on the costs, benefits, safety, feasibility, air quality impacts and consumer experience of using low carbon hydrogen for heating relative to other more established heat decarbonisation technologies" -- Hydrogen Strategy

Key milestones for the Strategy

Key milestones to be achieved under the "2020s Roadmap" of the Hydrogen Strategy, which was developed in collaboration with the Hydrogen Advisory Council, include:

The 10-27 terawatt hour (TWh) hydrogen currently being produced in the U.K. largely utilizes fossil fuels without CCUS that would lower emissions. Most of the U.K.'s production occurs in chemical plants and refineries. One of the key outcomes of the Hydrogen Strategy therefore is the decarbonization of this so-called gray hydrogen.

Notably, the Hydrogen Strategy thereby commits the U.K. to actively produce blue hydrogen using natural gas and CCUS. The government aims to establish CCUS in four industrial clusters by 2030 at the latest, supporting its ambition to capture 10 million metric tons of CO2/year and funded by the 1 billion-pound Carbon Capture and Storage Infrastructure Fund announced in 2020.

"This approach sets the U.K. apart, giving us a competitive advantage and building on our strengths to ensure we can be confident in delivering our 2030 ambition and beyond," the government outlines in the Hydrogen Strategy.

"However, costs of electrolytic hydrogen are expected to decrease considerably over time, and in some cases could become cost-competitive with CCUS-enabled methane reformation as early as 2025," it says.

Blue hydrogen is controversial among environmental groups, but some analysts consider it well suited to a nation with a ready natural gas supply from the North Sea.

Equally, a key theme of the Hydrogen Strategy is the government's determination to further consult the industry on various first steps, including on designing a low-carbon hydrogen standard and finalizing a hydrogen business model by 2022 to kickstart investment.

As part of the Hydrogen Strategy, the U.K. government has launched multiple consultations, especially on reducing costs for what remains an expensive gas to produce, including in its plan to carve out a 240 million-pound Net-Zero Hydrogen Fund.

The Department for Business, Energy and Industrial Strategy (BEIS) will select new production plants that will benefit from the earmarked funds after a period of consultation.

The BEIS model suggests that around 20%-35% of the U.K.'s energy needs, or 250-460 TWh of hydrogen, would need to be provided by the country's hydrogen economy by the middle of the 21st century

Regarding the crucial issue of hydrogen storage and distribution, the government hopes the 68 million-pound Longer Duration Energy Storage Demonstration competition will help deliver cost-effective solutions for the development of hydrogen network and storage infrastructure.

The government will also consult with industry on the feasibility of mixing 20% of hydrogen into the existing gas supply and restructuring the existing U.K. National Grid pipelines for hydrogen transmission.

On the demand side, the BEIS model suggests that around 20%-35% of the U.K.'s energy needs, or 250-460TWh of hydrogen, would need to be provided by the country's hydrogen economy by the middle of the 21st century. This could drive up the sector's worth to 13 billion pounds and help generate up to 100,000 jobs.

Demand-side interventions will include working with industry stakeholders to develop appropriate market frameworks, the government said.

Later in 2021, the U.K. government will launch a number of additional funds to support an industry switch to hydrogen and other low carbon fuels, including via a new 55 million-pound Industrial Fuel Switching 2 Competition and a new 40 million-pound Red Diesel Replacement Competition.

The ultimate share of hydrogen deployment, nonetheless, will depend on the cost of hydrogen technologies relative to alternatives including electrification, biomass and carbon capture, as per the model used in the U.K. Hydrogen Strategy.

Each day, OPIS editors canvass the market for hard-to-track delivered premiums into ports across Europe. They also draw on exclusive shipping data for supply insight that covers import volumes into Europe, identifying key dynamics behind price changes. This insight and price transparency for the European spot middle distillates market is delivered daily in the OPIS Europe Jet, Diesel & Gasoil Report. If you don't already subscribe, download a sample copy here – and then request a free trial here. 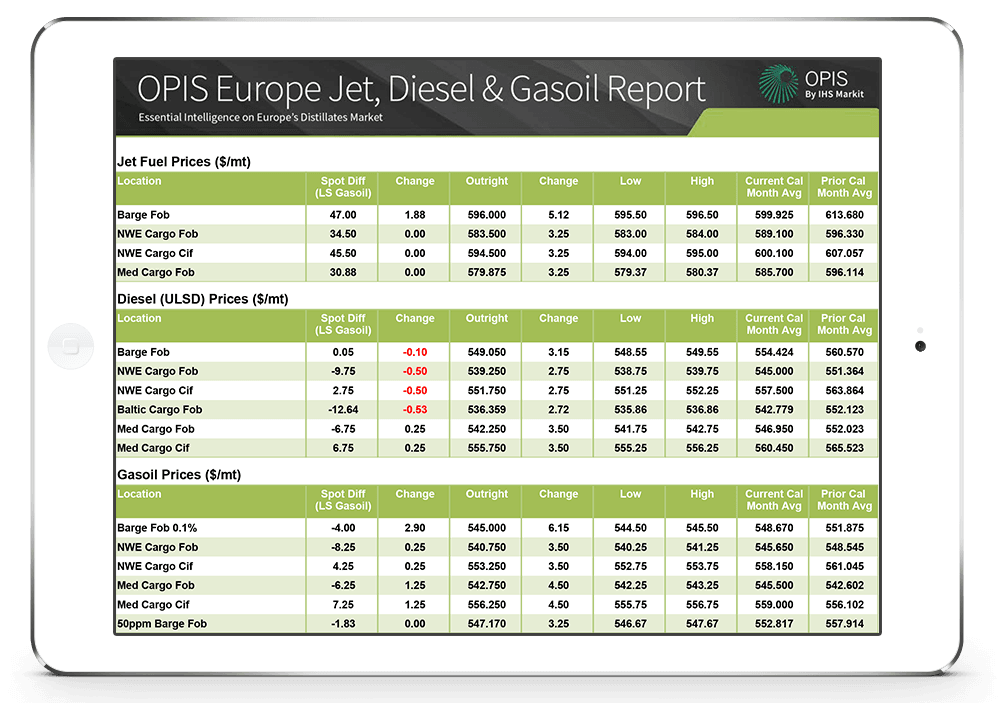