Now that the summer driving season has come to an end, the scorecard from OPIS shows what was a very profitable period between Memorial Day and Labor Day 2022.

The profitability stands out in 2022 especially considering gasoline demand was softer than previous summers, save the pandemic-stricken 2020 time period. Record high retail gasoline prices near the beginning of the summer driving season certainly weighed on gasoline consumption.

There are also some post-COVID changes in behavior to be considered in relation to gasoline demand as the working-from-home phenomenon continues to keep a lid on driving during the week. However, with more companies implementing a “return to the office” strategy, the prospects for demand have the potential to turn up in 2023. Countering some of that argument, though, is that light-duty vehicles are simply more efficient than they were several years ago.

Additionally, retailers and marketers were dealing with other factors that weighed on profitability. Perhaps the most controversial that gets the loudest screams from retailers of all varieties, not just gasoline and diesel retailers, is the swipe fees that are charged by the credit cards. Those swipe fees can chew into station profitability, especially in a high-priced environment. Labor costs and increasing transportation fees were other elements that retailers contended with this summer.

Gross Rack-to-Retail Margins Higher, but Volatile During the Driving Season

Nevertheless, it was still the strongest Memorial Day to Labor Day period for gross rack-to-retail margins on record with an average margin of 53.5cts/gal. That is just an incredible increase compared to previous summer driving seasons. It is nearly double the average margin in 2019 and 2020, and about 71.5% higher than the same period in 2021. 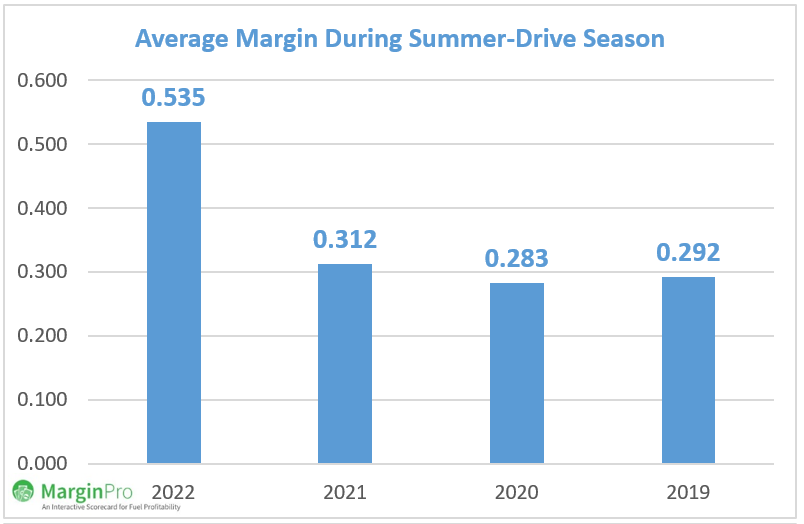 Incredible market volatility helped lead to the higher average for the summer driving season, but also lead to huge differences between the highest and lowest daily average. What’s more, the entire span of the average took place over the course of about one month.

Heading into the summer driving season, prices were spiking in the futures, wholesale and retail arenas with retail prices hitting an all-time high of $5.016/gal on June 14. A little over a week from the peak in retail prices, margins bottomed out of the period at just 9.6cts/gal. The lowest margin of the period from a timing perspective more closely correlated with the peak in RBOB futures on June 9 at $4.2762/gal. 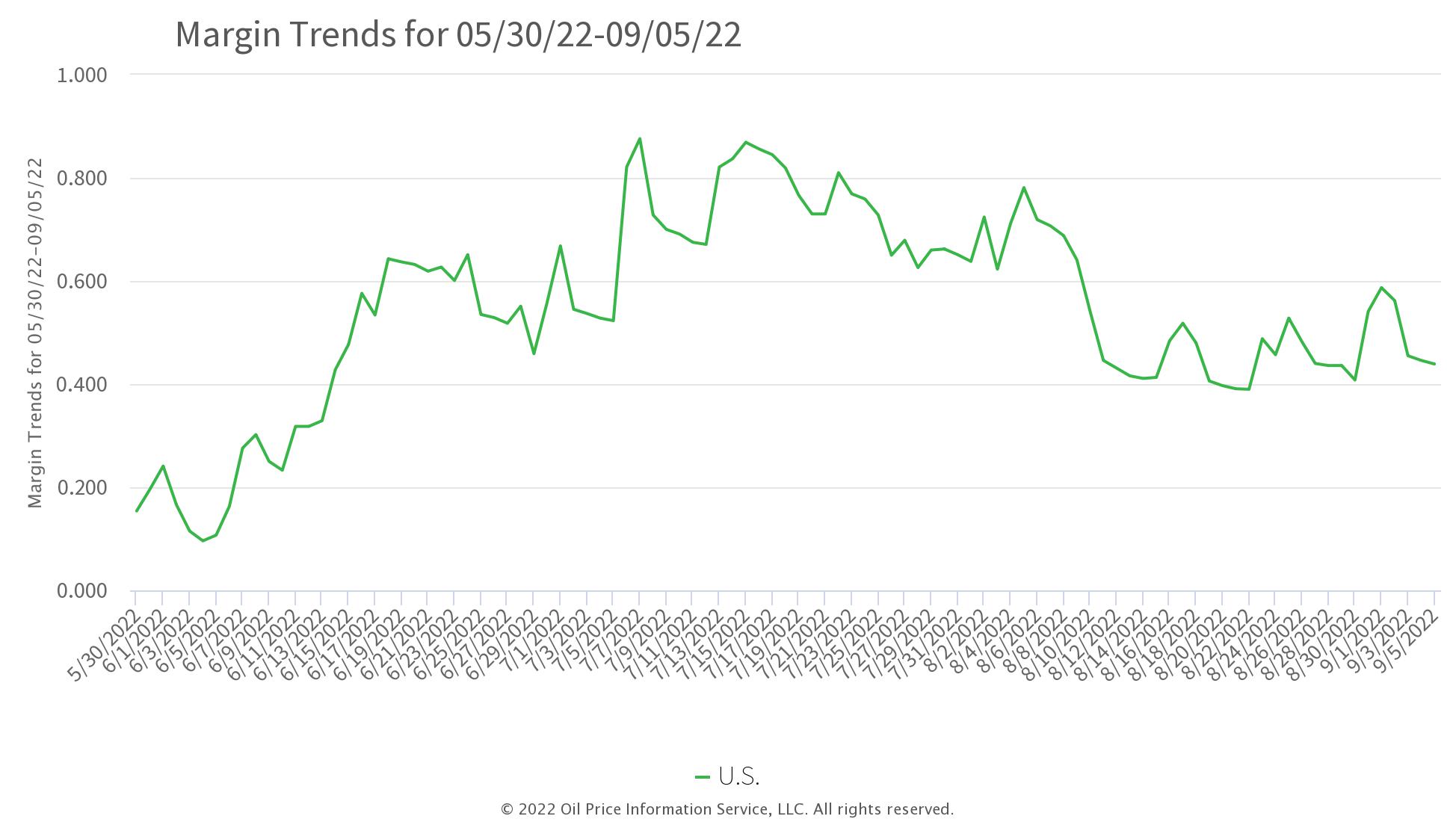 From the peak in RBOB futures, prices dropped sharply and quickly. Over the course of the next 14 trading days, RBOB futures fell in 10 of them with prices down more than 62cts between June 9 and 30. The real collapse, though, took place on July 5 where RBOB futures fell by almost 36cts in one trading session. It’s no surprise that the strongest margin of the summer driving season was just two days later at 87.6cts/gal.

After some chopping through July, August and the remainder of the summer driving season saw margins move in a 40-60cts range.

As the summer driving season ends, margins are just below that range, but overall 3rd quarter is still on pace to post the strongest quarterly margin on record.

The good news for retailers and marketers was the strong margins; the bad news was station volumes were the lowest for the summer driving season over the past several years, including the COVID-19 influenced 2020. 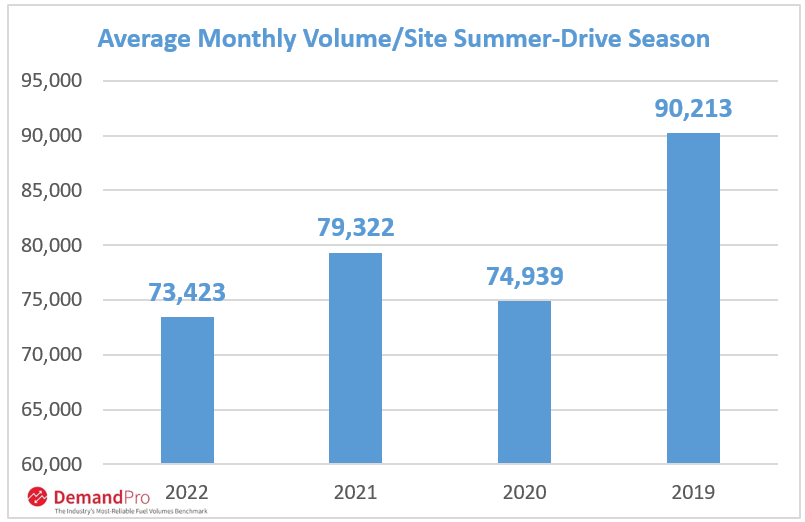 Based on OPIS consumption data from retail stations throughout the country, monthly volumes in the U.S. averaged 73,423 gallons, which is down a little more than 7% from a year ago. Compared to pre-pandemic levels in 2019, monthly volumes during the summer driving season were down by almost 17,000 gallons or 18.6%. In 2019, average station volumes came in at 90,213 gallons and that is going to be a difficult level to achieve, even with pandemic restrictions being lifted.

OPIS demand data also shows that July was the weakest month on a year-on-year basis for gasoline demand down 8.5%. Retail gasoline prices were certainly in a downward trend, but not quite enough to give motorists enough confidence to take to the roads as inflation in a variety of everyday goods and needs (groceries and rents for example) continued to strain household budgets.

The Energy Information Administration in their estimates of demand showed much of the same trends with year-on-year declines in what can be easily dubbed a sub-par summer.

According to the EIA, the strongest weekly demand measurement was the week ending July 1, which incidentally has a tendency to be among the strongest weeks of the year. That week has seen the highest demand calculation of 2022 at 9.413 million b/d. That was, however, well below 2021 as the week ending July 2, 2021, as EIA measured demand at 10.043 million b/d, was an all-time weekly high. 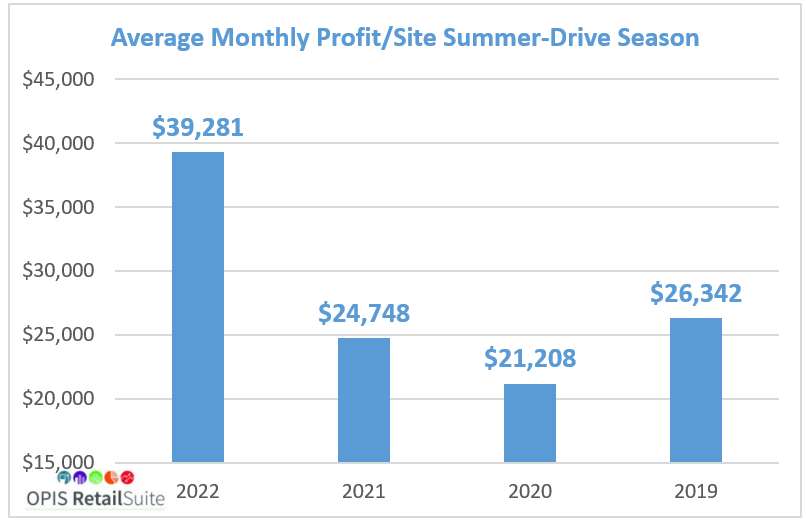 Based on margins and volumes, the average retail outlet saw monthly profit from gasoline sales come in at $39,281 some $14,500 higher than the 2021 summer driving season and more than $18,000 stronger than the pandemic-stricken summer of 2020.

Although the summer driving season straddles the second and third quarters, the gross rack to retail margins compare with some of the strongest margins on record. The highest quarterly average was the 2nd quarter of 2021, according to OPIS data at 41.9cts/gal. The strong summer months for gross margins have the 3rd quarter poised to break that record.

Find out how you can manage and grow your retail fuel business with OPIS RetailSuite, a set of five easy-to-use online tools. 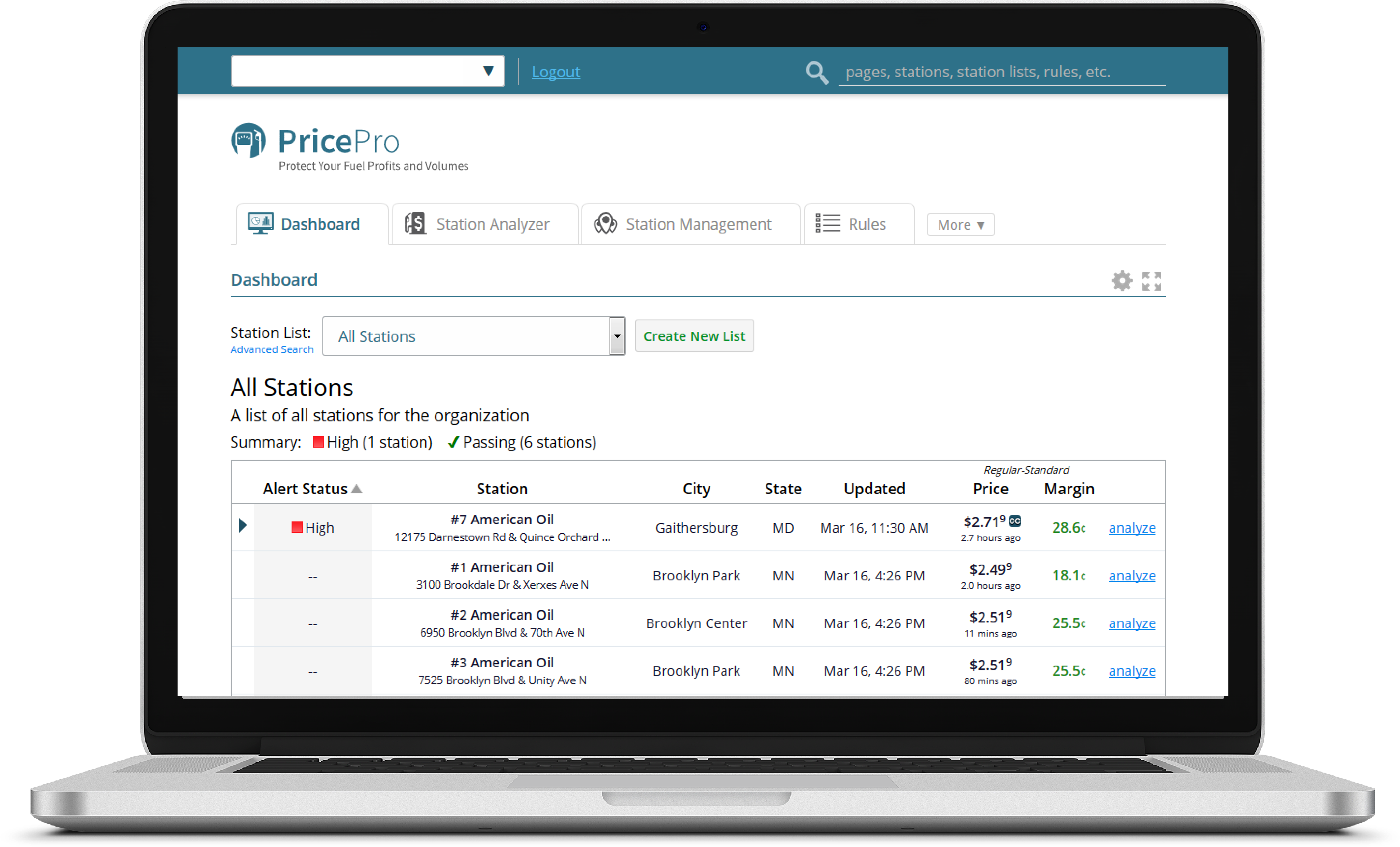 OPIS RetailSuite provides an integrated set of online solutions for retail fuel management, enabling you to analyze, strategize and succeed in your local market. Get all the data you need to analyze markets, price retail gasoline and diesel products competitively, and become a leader in your market – all in one place through the OPIS RetailSuite of integrated web-based applications.