Each year, attendees of OPIS’s RFS, RINs & Biofuels Forum come to the event looking for answers about biofuel markets and the government’s approach to the Renewable Fuel Standard (RFS) program.

With a new administration in the White House, record-high Renewable Identification Number (RIN) credits and a government and public increasingly focused on carbon emission reduction, there are more questions than usual in advance of this year’s conference, scheduled for September 15-17 in Chicago.

Forum attendees can participate in discussions regarding:

Speakers at the forum will discuss the following questions:

Now in its 13th year, the OPIS RFS, RINs & Biofuels Forum is the premier conference for up-to-date information on the biofuels market and the RFS program. Register early for the conference and ensure you don’t miss the regulatory and marketplace discussions that attendees have come to rely on at this event, plus essential in-person networking. 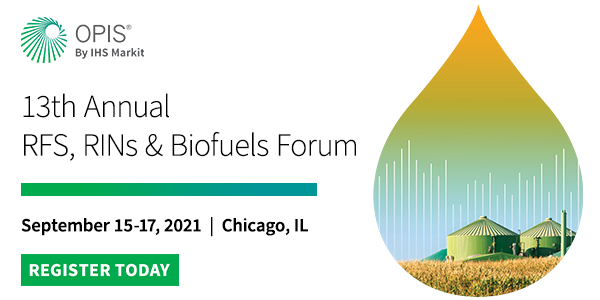