Hurricane Nicole’s landfall on the US East Coast caused a sigh of relief among the refining community as the Texas/Louisiana nexus averted another potential weather disaster. Where the storm DID land, however, was important to the plastic pipe markets.

Nicole made landfall on November 10 in Florida – and the OPIS PetroChem Wire PVC & Pipe Weekly covered it in detail, including a portion of its PVC & Pipe Plant Map to show the location of pipe plants in the storm’s path. 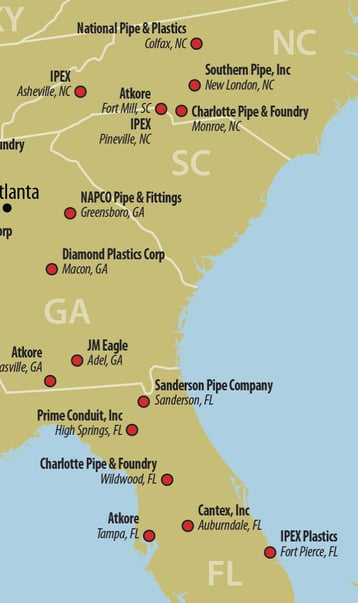 Prior to the storm’s arrival, several pipe plants closed as a precaution. On November 9, IPEX closed its Ft. Pierce plant; Charlotte closed its Wildwood plant; and Atkore shut its Tampa plant. On November 10, Sanderson shut down its plant in Sanderson, Florida. All of these plants were expected to be able to restart within 24 hours of the storm passing through the area. The report also noted that Cantex chose to run its Auburndale plant throughout the storm, as did Prime at its High Springs plant.

The swath of brief outages barely registered any impact, however, as the PVC pipe markets continued facing headwinds of waning demand and high inventories.

“Lower prices were not going to scare up any extra business at this point of the year,” Senior Editor Donna Todd wrote in the November 11 edition of the OPIS PetroChem Wire PVC & Pipe Weekly. “[PVC pipe sellers] were resigned to the fact that demand was going to be very low from this point until the beginning of March when they believe they will see a normal seasonal demand surge.”

The major types of pipe are conduit, plumbing and municipal. Conduit pipe, which is widely used to protect and route electrical cables underground or in a building’s structure, is priced in dollars per hundred feet; current US pricing was assessed by OPIS PCW on November 11 at $640-660/100 ft on this basis. In early May, prices were at $740-760/100 ft.

Plumbing pipe, which is priced on a $ per foot basis, has been in disarray in recent months amid sellers fighting for market share, Todd noted. “At the same time, distributors were playing one converter off against another in an effort to get ever-lower prices, which was devaluing their own inventory,” she wrote earlier this month. “Meanwhile, confusion reigned.” In the past month, PVC plumbing pipe prices have fallen from a high of $4.95/ft to $3.75/ft on November 11. 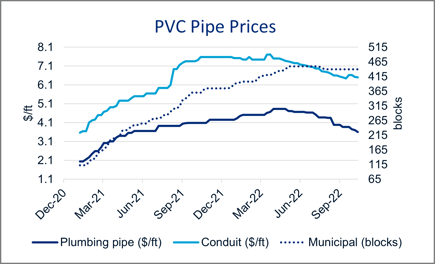 Municipal pipe is priced in Blocks, which refer to price levels published in converters’ Block Books. Municipal pipe has been priced at Block 440 for 29 weeks, showing more strength than other types of pipe. However, with inventories at the distributor level still fairly high, Todd observed in the mid-November PVC & Pipe Report that some sellers of this type of pipe were “apprehensive that the longer the price stays at Block 440 the faster it will drop once it starts to go down.”

And so, Hurricane Nicole made landfall in a pipe market soft enough to absorb brief outages at a smattering of plants. If this had been a year ago, such an event would have been considered to be a mini-catastrophe as the world seemed to be scrambling to find pipe at all and struggled with long backlogs and delivery delays.

While the impact of the storm was minimal, weather is a factor that is nearly impossible to build into forecast models. However, with reports like the PetroChem Wire PVC & Pipe Weekly, you'll know what to expect when the weather enters the market’s picture.

Make sure you’ve got the OPIS PCW PVC & Pipe Report coming to your inbox every week! 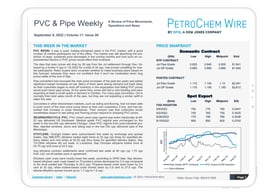 The only source for pricing on finished PVC pipe. The PetroChem Wire by OPIS PVC & Pipe Weekly provides a complete briefing on PVC resin price movements in the domestic and export markets.