Inside the 2017 Rally: Mont Belvieu Propane & Its Global LPG Reach

It would be a gross understatement to say that shale has changed everything.

But we’ll say it nonetheless. Shale has changed everything, particularly when it comes to LPG– that flammable mixture of hydrocarbon gases that finds its way to uses as varied as filling butane lighters to making high-tech plastics.

The advent of modern technology in hydraulic fracturing led to an epic rise in natural gas production – with propane as a by-product – in much of the 2000s. It also led to the United States becoming the world’s leading LPG producer and exporter.

In fact, based on the latest global market trends, it’s looking likely that additional marine capacity will be required by the 2020/2021 time frame, as Scott Gray. Senior Director, Waterborne, Energy Insight, will discuss at the upcoming 8th Annual OPIS NGL Summit.

Because of its key position as an exporter, what happens in the United States market ripples throughout the rest of the world. That scenario was exemplified in a recent propane market rally.

The IEA’s recent World Energy Outlook highlighted that the U.S. will account for 80% of the increase in global oil supply between now and 2025. Shale producers will fund new ways to step up output even as the market rides the volatility of shifting market trends. This chart below lays out the export trend:

For the purposes of this post, the lead character is propane and the setting is, undoubtedly, at Mont Belvieu, Texas. This location is the preeminent U.S. hub, given its proximity to refineries, gas-processing plants, underground storage and export facilities.

Since 2012, propane values in Mont Belvieu were largely driven down to a ratio to crude oil in a 35%-45% range, as the advent of shale gas production heaped pressure on inventories.

But it didn’t stay at that level last year. Mont Belvieu propane’s ratio to crude oil, in the latter part of 2017, rebounded to above 70%.

So, what happened in the recent rally and what was the connection between Mont Belvieu and global LPG prices? One hint: The global markets were eager dance partners.

Spotlight on the Recent Rally:  All Eyes on Hurricane Harvey

This past summer, Hurricane Harvey — the 500-year storm that devastated the U.S. Gulf Coast — demonstrated how the global LPG market has come to depend on U.S. product and how prices are nowadays inextricably linked to Mont Belvieu – and vice versa.

As Harvey raged, export terminal closures on the Gulf Coast raised supply concerns internationally. And those very concerns meant that, surprisingly, the price effect of Harvey was not initially felt in Mont Belvieu, but in the Far East – the destination of two-thirds of U.S. seaborne LPG exports. That’s the market that took the lead.

On Aug. 28, after the Houston Ship Channel closed Aug. 25 because of the storm, outright CFR Japan propane prices surged 10% over the previous week, whereas Mont Belvieu propane rose by just 2% over the same period.

The U.S. market moved in step, however. The subsequent U.S. rally was partly in reaction to the Far East spike, underscoring how linked global markets have become.

The pricing tango continued. Northwest Europe propane prices followed the tempo to reach a premium over naphtha for the first time in four years. NWE petrochemical crackers, after years of running increased propane feedstock in place of naphtha, cut propane intake to a two-year low and imported less than half of prior-year levels.

Still, Harvey Was Not the Whole Story

Hurricane Harvey was not the sole driver of the market shift. The stage had been set prior to summer 2017, with the hurricane merely accelerating an already fraught situation of U.S. propane inventories.

IHS Markit, parent company of OPIS, estimated that approximately a week of supply (including exports) was lost in the immediate aftermath of the storm, leading the United States to start winter with a five-year low of just 41.4 days of implied supply.

But concerns over U.S. inventories, arguably, first surfaced in March 2017, long before Harvey’s winds picked up, after winter ended with around 40 million bbl in stock.

Price implications were felt even then. Mont Belvieu propane’s ratio to crude oil, rather than dipping heading into the summer months as in previous years, rolled along in the mid-50s percentage of WTI range before shooting up from July onward to above 70%.

To put last year’s rise further into perspective, U.S. propane-to-crude values in October were higher than during the peak of the extreme weather event dubbed the “polar vortex” that blasted through North America in January 2014.

Looking to the current market, propane values have started to taper off in January as exports haven’t been as high as last year.

And, if Harvey’s story is any guide, this will have worldwide ramifications.

In it, you'll get greater detail on the U.S. rally and its global ramifications, plus:

The report is free to download. Get your copy now! 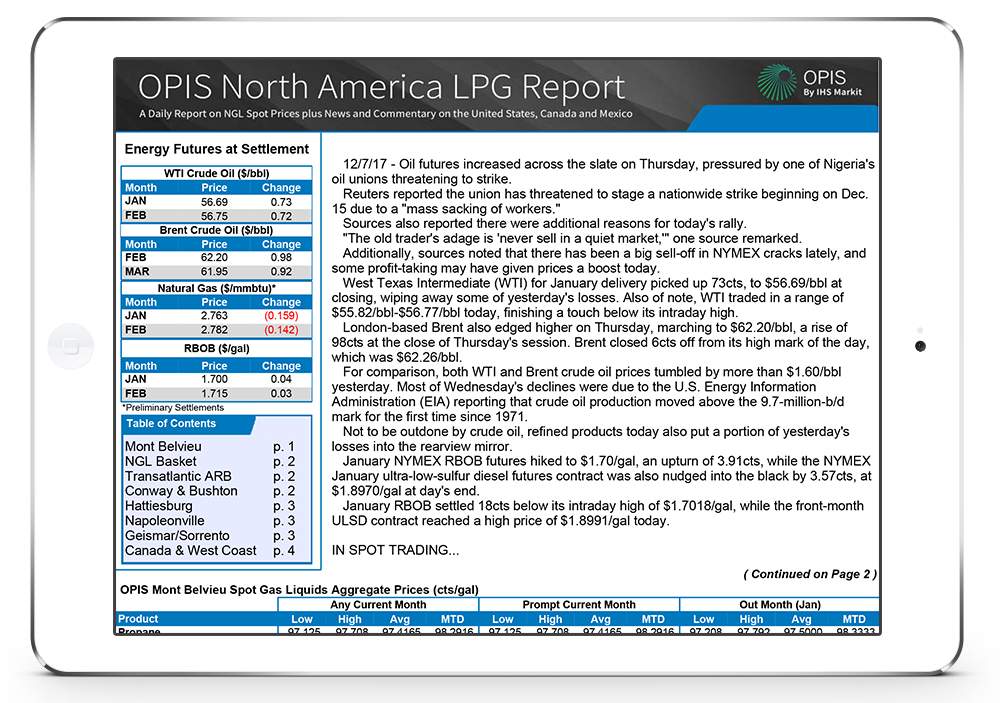 As the official spot benchmark, every gallon of propane, butane, ethane and natural gasoline in the U.S. market is tied to OPIS pricing. OPIS covers U.S. natural gas liquids spot markets on a full-day basis, canvassing an unparalleled source pool to provide pricing you can trust.