Modern Slavery: The Dark Side of Australia’s Wind, Solar and Battery Supply Chains

Australia, once a climate change laggard, is on a trajectory to produce most of its electricity from solar, wind, hydro and batteries.

With a target for 82% of its electricity to be generated by renewable sources by 2030, the country needs to install about 40 seven-megawatt wind turbines every month and more than 22,000 500-watt solar panels every day over the next eight years, according to one government estimate.

But the lack of domestic manufacturing capabilities and the global nature of supply chains means Australia’s energy transition is exposed to modern slavery practices, from forced labor in China to child labor in Africa, Australia’s Clean Energy Council said in its "Addressing Modern Slavery in the Clean Energy Sector" white paper published on Nov. 29.

Nearly half of the world’s solar-grade polysilicon, a key component in solar panels, comes from the Xinjiang Uyghur Autonomous Region of China where an estimated 2.6 million Uyghur and Kazakh citizens have been subjected to "surplus labor" and "re-education" programs as well as alleged human rights violations.

"The high proportion of global polysilicon that is manufactured in Xinjiang means that the risk of forced labor entering into the supply chains of Australia's solar energy industry is significant," the Clean Energy Council said.

OPIS Solar Editor Farahdian Aziz has reported that US authorities are stepping up efforts to seize and detain imports of polysilicon and other solar panel raw materials from the Xinjiang Uyghur Autonomous Region on grounds of forced labor under the U.S.' Uyghur Forced Labor Prevention Act (UFLPA).

Prior to June 2022, when the UFLPA came into force, the US Customs and Border Protection had escalated enforcement efforts against forced labor through the Withhold Release Order, Aziz has reported.

On wind energy, the rapid growth in demand for balsa wood for making wind turbine blades has reportedly led to workers in Ecuador's Amazon region being subjected to substandard labor conditions.

The increase in Amazonian logging has also led to deforestation and violation of the land rights of the local indigenous populations, the Clean Energy Council said.

The exponential growth in renewable energy deployment will require equally sizeable growth in energy storage. A core component of this industry is lithium-ion batteries, which accounts for more than 50% of global cobalt demand.

The Democratic Republic of the Congo is the world’s biggest cobalt producer and as much as 30% of its cobalt output comes from small-scale artisanal mines, where an estimated 250,000 people, including at least 35,000 children, work under hazardous and exploitative conditions, according to the white paper.

Global demand for cobalt in lithium-ion batteries is only set to surge with electric vehicle sales predicted to grow from 6.5 million in 2021 to 66 million by 2040.

To help mitigate the risks of forced labor from its renewable energy supply chains, the Clean Energy Council calls on the Australian government to support the development of local manufacturing capabilities and to collaborate with key nations on a certificate of origin scheme to ensure imported goods are free from slavery.

"Australia has significant expertise in mineral extraction, so as a nation, we can be looking at developing our capacity to extract, process and manufacture materials and components for solar panels, batteries and wind turbines," Clean Energy Council Policy Director of Energy Generation and Storage Dr. Nicholas Aberle said at the report’s launch. 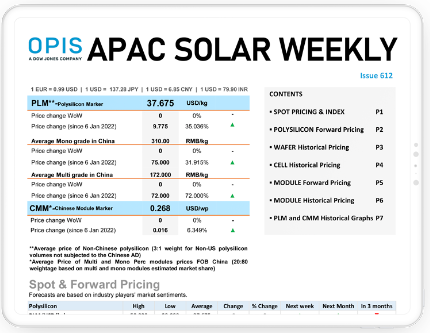 From upstream polysilicon, wafers and cells, to downstream panel prices, the OPIS APAC Solar Weekly Report keeps you updated on price trends and forward prices. It's the first solar materials price report to use an assessment methodology that follows IOSCO requirements for fair and transparent pricing.