Following passage of energy reforms in late 2013, Mexico’s upstream and downstream gasoline and diesel markets are opening to private investment  – and the outside world – for the first time in almost 80 years.

Mexico’s government stopped setting retail fuel prices in the northern third of the country in the first half of 2017 – allowing them to float freely – and it plans to continue the process in the center and south through the end of the year.

Here's a clear graphic breakdown of the Mexico fuel price liberalization by region and by date. It's a great resource to print out for quick reference. 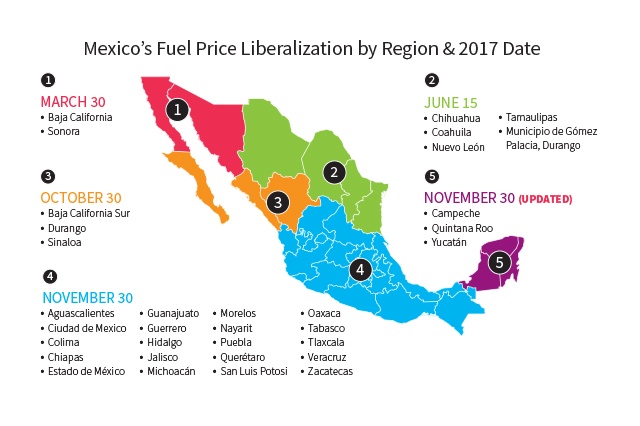 The downstream market has attracted strong attention from companies outside the country, but they have moved cautiously, closely eyeing emerging regulation and insufficient infrastructure and studying a retail landscape that has known only one fuel manufacturer, distributor and brand for decades: Pemex, the now-restructured state oil monopoly.

Liberalized prices have yet to show much movement, according to cross-border business consultant Mario Guido, with Strategic Business Development.

Mexican motorists, long used to pump prices subsidized by the government as a social service, are not yet price-sensitive.  Pemex is still the dominant supplier and most retailers are still selling at the Pemex price.

“The market’s kind of waking up,” Guido tells OPIS. The margin on imported fuel “is enough for the small guys … there’s a lot of interest,” he said.

Some U.S. refiner/marketers, like Andeavor (formerly Tesoro) and Valero, are widening their existing export channels to Mexico by establishing wholesale operations in the country, leasing storage and transportation capacity there. Others, such as Marathon Petroleum, are mulling the prospect.

Valero’s and Andeavor’s wholesale presence will introduce competition with Pemex and “once we have that supply we’ll see how it trickles down,” Guido said.

Get the price transparency the market trusts from OPIS as Mexico rolls out its reforms.

Download your free copy of The Road to Liberalized Fuel Markets in Mexico and get: