As Gasoline Demand Wanes in the U.S., Mexico Provides a Long-Term Opportunity for U.S. Refiners

In contrast to Mexico’s growing market, gasoline demand in the U.S. is expected to decrease 18% by 2030, according to the U.S. Energy Information Administration (EIA). Decreasing demand is driven by the transition to clean energy and electric vehicles.

In our new OPIS Mexico 2021 Briefing, we’ve gathered news coverage and insights into Mexico’s fuel market as the country recovers from the COVID-19 pandemic.

Mexico is a long-term opportunity for U.S. refiners, particularly on the Pacific and Gulf Coasts. The country’s energy transition will lag behind that of the U.S., Canada and Europe, creating a market for foreign refiners to export their excess product. Mexican infrastructure is outdated and inefficient, forcing the country to rely on foreign imports to meet fuel demand. Despite President López Obrador’s push towards energy independence, Mexico will likely remain a net importer.

In the short term, foreign companies face several challenges to doing business in Mexico. Pandemic-related impacts on fuel demand and Mexico’s economy are still significant. Compared to March 2019 levels, gasoline and diesel demand are down 10% and 12.7%, respectively. Fuel demand has recently increased as pandemic restrictions have been lifted and the Mexican economy moves towards recovery. Although the economic outlook for Mexico is improving, IHS Markit does not expect gasoline demand to return to pre-pandemic levels until 2024.

Read the new OPIS Mexico 2021 Briefing for a full analysis of the economic outlook for Mexico and how it affects short-and long-term fuel demand.

In March, López Obrador introduced a hydrocarbon reform bill to protect Pemex, ensure domestic supply and end reliance on foreign imports. The bill allows the government to cancel existing import permits if there is a perceived security threat or illegal importing activity. The bill also requires companies to maintain inventory equivalent to five days of sales.

Infrastructure project delays and the burdensome permitting process hamper the ability of foreign companies to import fuel. Before López Obrador took office, more than 70 new marine, rail, and pipeline terminal projects were planned, primarily driven by foreign companies. Permits were granted for more than 40 of these terminals; however, only 13 projects and two capacity expansions came online in 2020, according to data from OPIS.

Despite free trade agreements between Mexico and the U.S., Illicit fuel imports pose an additional challenge to foreign investors. Some importers misregister or falsely classify products to avoid paying import duties, creating a significant price advantage over legal importers. Illegal imports decreased in Q1 2021 after the government implemented military oversight of customs and border crossings. The decrease was short-lived, due to bottlenecks at the border and lack of prosecution from the government.

The long-term fuel market in Mexico is promising, but foreign investors should use caution. Read our new report for a full overview of the current challenges to doing business in Mexico.

Market dynamics in Mexico will continue to unfold. Go here to learn more about how OPIS helps you succeed in the changing cross-border fuel markets.

Contributions to this blog were made by Daniel Rodriguez, Justin Schneewind, Kevin Brady and Courtney Antolik

Despite push toward energy independence,
the country remains an attractive target for foreign investors 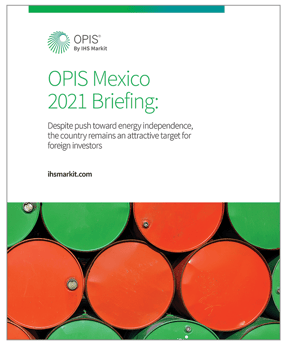 Get our complete analysis of the state of Mexico's fuel markets and what it means for those looking to invest and seize opportunity in a market where gasoline demand is expected to increase.