What is LNG, and why does it matter so much to the U.S. and global energy industry?

LNG is liquefied natural gas, gas that has been cooled to a liquid state (at about -260oF), which enables the transport of natural gas by ocean tanker, rather than the traditional pipeline that moves natural gas across large distances.

This chart shows how LNG fits into the natural gas slate. For more on this, check out this blog. 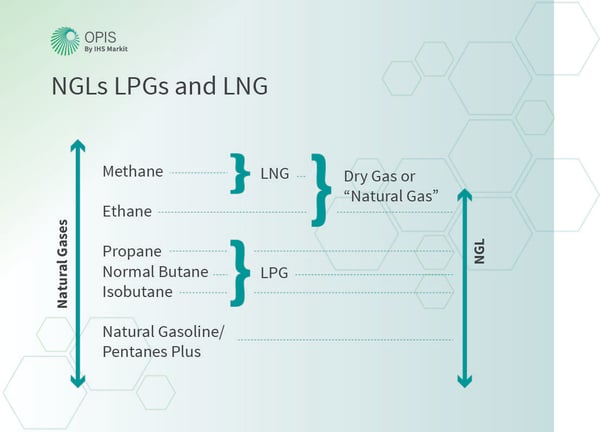 For consuming countries, LNG presents a cost-effective way to replace power generated from burning heating oil or coal with a cleaner resource. For exporter nations, such as the United States, LNG represents a huge new market opportunity.

Global LNG demand is being driven by worldwide demand for more natural gas for operating electric power plants, as well as heating and cooking.

As the International Energy Agency (IEA) observed in its “Gas 2019” report, “Power generation accounted for half of the growth in natural gas consumption over the last decade, helped by abundant fuel supply in mature markets, fuel switching from oil in emerging markets, and the reduction in nuclear generation in the aftermath of the Fukushima Daiichi nuclear accident.”

As Shell noted in a report in early 2019, “LNG continues to be the fastest-growing gas supply source worldwide.”

According to IHS Markit, 2018 was a record year in global LNG demand with net volumes delivered to end markets reaching 320 million metric tons (MMt). Demand is expected to grow to over 550 MMt by 2030.

Demand for LNG is distributed around the world, but the Top 5 markets are in Asia (2018 volumes):

Asia also is where the growth is anticipated. China is on track to become the world’s largest LNG importer, said CNPC Vice President Hou Qijun at the IHS Markit CERAWeek 2019 conference in March. The country could increase its gas imports by almost 70% between 2020 and 2030, he said.

The map below shows that investment around the world in regasification facilities – which are necessary to return the LNG to gas form for distribution by pipeline to its final destination – is continuing at a busy pace. 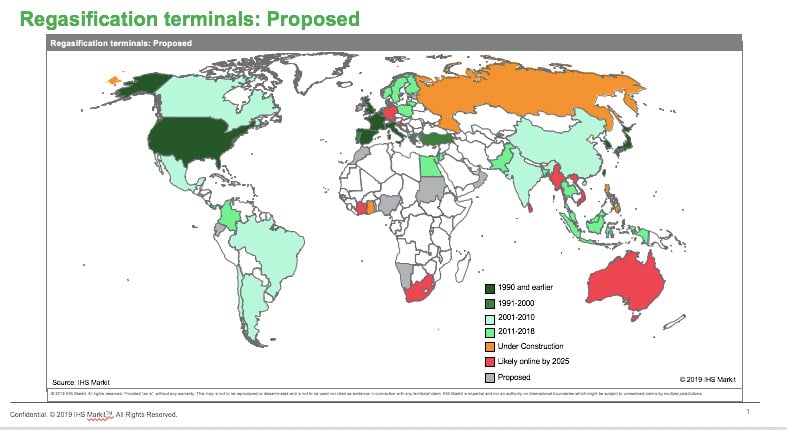 New markets for LNG could emerge in the next decade. One is the marine fuel market because International Maritime Organization restrictions on sulfur emissions go into effect Jan. 1, 2020. Marine shippers have three options to comply: Purchase ultra-low-sulfur marine fuel, retrofit their ships’ emissions stacks with scrubbers or use LNG.

Shell reports that by the end of 2019, an estimated 280 ships will be optimized for using LNG. As recently as March 2019, French shipping operator CMA CGM SA said that five of the 10 new container megaships it ordered from China State Shipbuilding Corp. will be powered by LNG.

LNG also is making inroads in heavy-duty trucking. China already has more than 300,000 LNG trucks and buses, according to Shell, and Europe’s heavy-duty transport market for LNG will reach hundreds of thousands by 2030.

Given the global trends, it’s not surprising the potential for LNG trade is booming. What’s impressive, however, is how quickly the United States has become a prominent player.

The first U.S. LNG export facility, Sabine Pass LNG in the U.S. Gulf Coast, began commercial operations in February 2016. Since that time, U.S. LNG has been exported to 32 markets – primarily through the Panama Canal to the large demand markets in Asia  as well as to Mexico and Europe.

Three large LNG export facilities are operating in the United States today, and three more are expected to open in 2019 or 2020.

EIA says LNG will account for nearly all U.S. natural gas export growth in 2020 through 2050.

U.S. Department of Energy Secretary Rick Perry commented in February that demand will remain strong. “The fact is, this is a fuel that will clean up the environment. As we look at India, as we look at China, these massive economies, we need probably more projects than what we’ve got on the books today to be able to meet that demand,” he said.

Why U.S. LNG Is Competitive Globally

A look at the Top 10 destinations for US LNG during 2016-18 shows that the United States is not dependent on one or two countries or regions.

Additionally, U.S. LNG exports are accelerating the transition to a more commoditized LNG market. In the past, almost all LNG was sold with tight prohibitions on reshipment of LNG beyond its original destination. U.S. producers have provided destination flexibility at a large scale.

“U.S. LNG exports are not o

“We want to make natural gas more than a bridge fuel … to make sure that gas has a meaningful role not only today, not only in 20 years, but forever,” said Jack Fusco, president and CEO of Cheniere Energy, also speaking at CERAWeek 2019. Cheniere operates both Sabine Pass LNG and Corpus Christi LNG.

The company now has 18 “foundational deals” for LNG offtake, he said, seven of which were signed in 2018, indicating the growing confidence that buyers have in the long-term viability of LNG, Fusco said.

Challenges in the LNG Market

While the opportunities for U.S. exports of LNG are vast, there are a few storm clouds on the horizon.

Trade war with China: IHS Markit forecasts that China will surpass Japan to become the world’s largest importer of LNG by the mid-2020s, as it seeks to reduce its reliance on high-polluting coal to generate power. But the escalating U.S.-China trade war since 2018 has bottled up some U.S. LNG exports temporarily. U.S. LNG deliveries to China were 0.14 MMt in Q4 2018, down from a peak in Q4 2017 of 0.94 MMt.

Russia: Russia is the biggest supplier of natural gas by pipeline to Europe. U.S. LNG cannot match Russian gas on a price basis, but the United States is considered by many buyers to be a more politically reliable partner and a good counterbalance to too much reliance on Russian gas, which has been used as political leverage in the past.

Domestic prices: Industrial users of natural gas in the United States – especially the fast-growing petrochemicals industry based in the U.S. Gulf – have argued that exporting too much natural gas too quickly will raise the cost of natural gas to domestic users. If this occurs, they say that their price advantage against international petrochemicals users will evaporate.

However, competing studies dispute that this will happen. For example, the EIA’s Annual Outlook 2019 forecasts that U.S. dry natural gas production is predicted to reach just under 40 trillion cubic feet (Tcf) by 2040, while domestic consumption is projected to grow to roughly 30 Tcf that year, leaving a comfortable margin for LNG exports.

Bottom Line: The Future Is Bright for LNG

The message is clear: U.S. LNG exports this year will break a record, and that record will be broken again next year and likely for years to come. The investments of tens of billions of dollars are poised to realize real dividends, by capturing market share around the world and providing a key outlet – and major driver – for rising U.S. natural gas production.

In Case you Missed It! 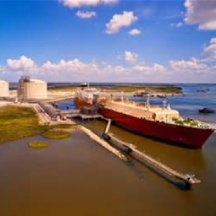 Get all the details here.