A key message to emerge from the recent India Energy Forum by CERAWeek was the strong commitment by the Indian government in a transition to cleaner energy, with Indian Prime Minister Narendra Modi reiterating his government's commitment to the climate goals of the Paris Agreement, while drawing attention to the developing nation's growing energy demand.

This message may, however, face obstacles from an unexpected and often unrecognized quarter in energy transition discussions – tradition and an individual’s belief structure, especially in rural areas.

The role of these forces and the obstacle they may create to transitioning to cleaner energy was highlighted in a recent study on villagers in four villages in rural India concerning the use of cooking fuels. The report suggests that India’s transition to clean cooking fuels could be hindered by the cooking fuel users’ belief as to the merits of firewood (the traditional fuel) versus Liquified Petroleum Gas (LPG) (a cleaner fuel) on their family’s wellbeing.

The study’s authors, Dr Rosie Day of the U.K.’s University of Birmingham and Dr Yuwan Malakar of the Commonwealth Scientific and Industrial Research Organization (CSIRO) Land & Water in Australia, note that women are predominantly the family cooks in rural India and could help clarify why India’s switch from traditional solid fuels is slower than expected.

“Whilst cooking is not solely a woman’s job, the reality is that, in rural India, women are considered the primary cooks. It is, therefore, critical to unravel how women see the relationship between wellbeing and cooking fuel if India is to make progress in transitioning to clean fuels,” said co-author of the study Dr Day.

The report showed that firewood users saw three key advantages to continued use of firewood:

LPG users in contrast extolled the benefits it provides by enabling them to:

India is a signatory to the UN’s Sustainable Development Goals (SDGs), one of which is to provide universal access to clean cooking fuels. Yet the study notes that Indian reliance on solid fuels, wood, charcoal, dung cakes, biomass, is the largest globally.

The Indian Government sees the uptake of clean cooking fuels in rural households as a key policy objective and introduced the Pradhan Mantri Ujjwala Yojana (PMUY) scheme in May 2016. Its goal was to provide LPG connections to all Indian households below poverty level (BPL), replacing other cooking fuels – typically solid fuels – with cleaner and more efficient LPG. The Government noted cooking with a solid fuel on an open fire inside the home is the equivalent of smoking 400 cigarettes per day.

The study was carried out in four rural villages in the Chittoor district located in the southernmost part of the coastal state of Andhra Pradesh in south east India.

Chittoor’s population is 4 million as per the Indian 2011 census of which 70% live in rural areas.

Cooking fuel data for Chittoor is typical for India. Around 86% of rural households in India relied on solid cooking fuels (firewood, crop residue, animal dung, coal, lignite and charcoal) based on the 2011 census.

PMUY is targeting providing 50 million LPG connections to women in BPL households. This is just half of the total number of households without access to clean cooking fuel. PMUY estimate that there are 240 million households in India of which around 100 million (41.7%) do not have access to LPG as a cooking fuel. To help households meet the costs of connecting to LPG, each household will receive Rupees 1,600 for each LPG connection – double the monthly expenditure in the villages in the study area.

IHS Markit analysts estimated that 119.7 million LPG cylinders were delivered between April to June under the PMUY scheme, according to the September COVID-19 India LPG Market Update. To meet the heightened demand from the PMUY scheme, the update concludes India will need to import an additional 2.4 million mt of LPG in 2020 than it did in 2019.

IHS Markit data clearly shows the enormity of the task the Indian government faces in meeting the transition to LPG as a cooking fuel. Notwithstanding the preceding comments about rural households expressing a reluctance to switch away from solid fuel, India does not produce enough LPG to meet demand currently. The demand surplus will only worsen over the coming decade to 2030, according to the analysis. 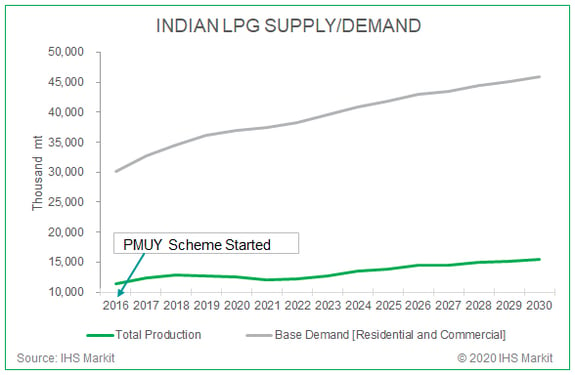 Base demand, which is defined as residential and commercial usage and accounts for an average 89% of total Indian LPG demand, will grow by 7 million mt (20%) to 34.88 million mt with the annual demand averaging 31.34 million mt during the decade. Supply will lag demand during this time frame, growing by 4 million mt (21%) to 19.43 million mt. The average annual deficit for the decade is 17.62 million mt.

“Despite India’s aim of switching to clean fuels, the scale of solid fuel use in rural areas signals that widespread uptake and sustained use of clean fuels is a distant reality,” said Dr Day. 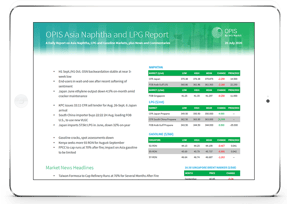