Get the Cold, Hard Facts on Fuel Temperature Correction

It's that time again! The mercury in the thermometer is starting to drop...

And fuel suppliers can get hot under the collar when temperatures turn cold at the wholesale rack.

Here’s some science to start us off: Temperature makes fuel volumes fluctuate, contracting or expanding when the mercury drops below or climbs above 60 degrees Fahrenheit at the rack.

Here’s a 100% fake example to drive this point home: Imagine 1,000 gallons of gasoline was sitting in a swimming pool on Valentines Day outside Columbus, Ohio. Fast forward to the 4th of July and there would actually be more gasoline in that pool. The change in temperature alone swells the volume.

But fuel doesn’t just hang out in a kiddie pool at a rack. It gets put in a truck and delivered to a customer, who then puts it into temperature-controlled storage.

This piece of the distribution chain adds another layer to fuel temperature correction. The gallons a supplier agrees to sell on frigid January nights or the dog days of August change in volume once they exit a truck and are deposited into a customer's insulated tank. That’s because they leave outside-air temperature and heat up or cool down in storage.

So, in the winter, the end result is that suppliers wind up delivering more fuel than they were contracted to provide to their customers, which has ramifications on the way the market buys and sells gasoline, diesel and biodiesel blends.

This graphic walks you through the ins and outs of fuel temperature correction: 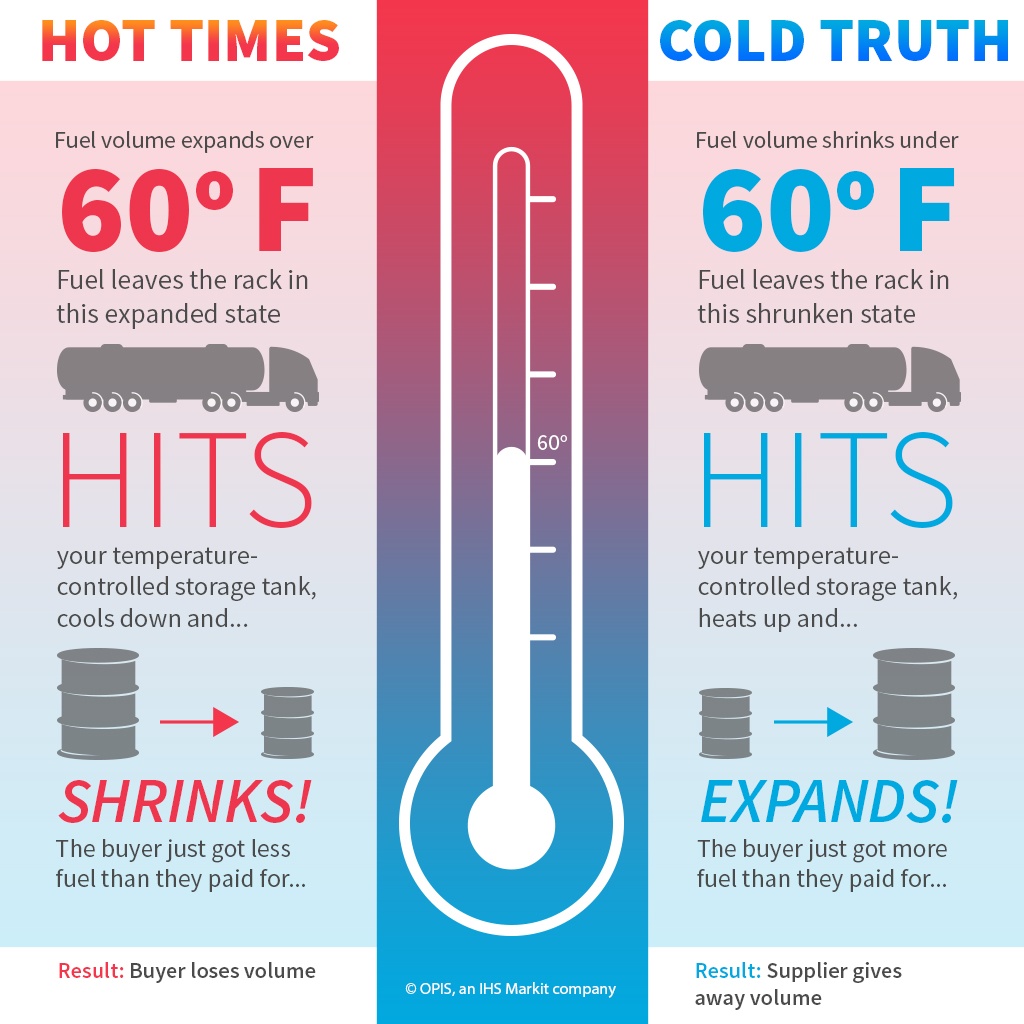 In modern practice, the industry adjusts gross amounts up or down using thermodynamic temperature-correction measurements to determine the accurate net amount received.

But How Do You Price It?

As you can see from the graphic above, each temperature scenario has its dominant winners and losers. Colder climates tend to put suppliers at a greater disadvantage because they are giving away net gallons. A hotter region sees buyers netting less fuel than they contracted to receive.

In light of this, the industry has gravitated toward gross or net billing to reflect prevailing climates. In some cases, states have mandated one practice over another.

How a Third-Party Helped

Fuel is distributed daily at nearly 400 wholesale rack markets across the United States. Supplier prices at those racks move up or down each day at around 6pm, generally based on the movements of the spot market.

Billions of gallons of gasoline, diesel and biodiesel blends transact on contracts referencing OPIS rack benchmarks, which is why this PRA realized that it needed to give the industry a mechanism for creating formula deals that accommodate temperature shifts.

This is what OPIS did to help its customers:

Don't Get Left Out in the Cold on Spot Moves

Seasonal trends take their toll on spot gasoline and diesel fuel prices, directly influencing what wholesale customers will pay. The OPIS Mobile Spot Ticker connects you to spot market trades all day, wherever you are, so you can always anticipate 6pm rack moves.