In January, after a socially-distant holiday season, with many countries announcing further lockdowns amid rising infection rates, the COVID-19 pandemic cast a long shadow over demand expectations for the year. Spot styrene trading got off to a slow start. Robust propylene oxide styrene monomer production rates provided the market with ample styrene supply. Ethylbenzene styrene monomer operating rates were strong, and they too ensured sufficient availability of the aromatic.

Demand too was muted, as buyers had covered their requirements before the start of the winter holiday season in Europe. The outlook for global styrene demand growth was initially as bearish, with more capacity expected to come online in mainland China: some 800,000 metric tons in the first quarter to be more precise. 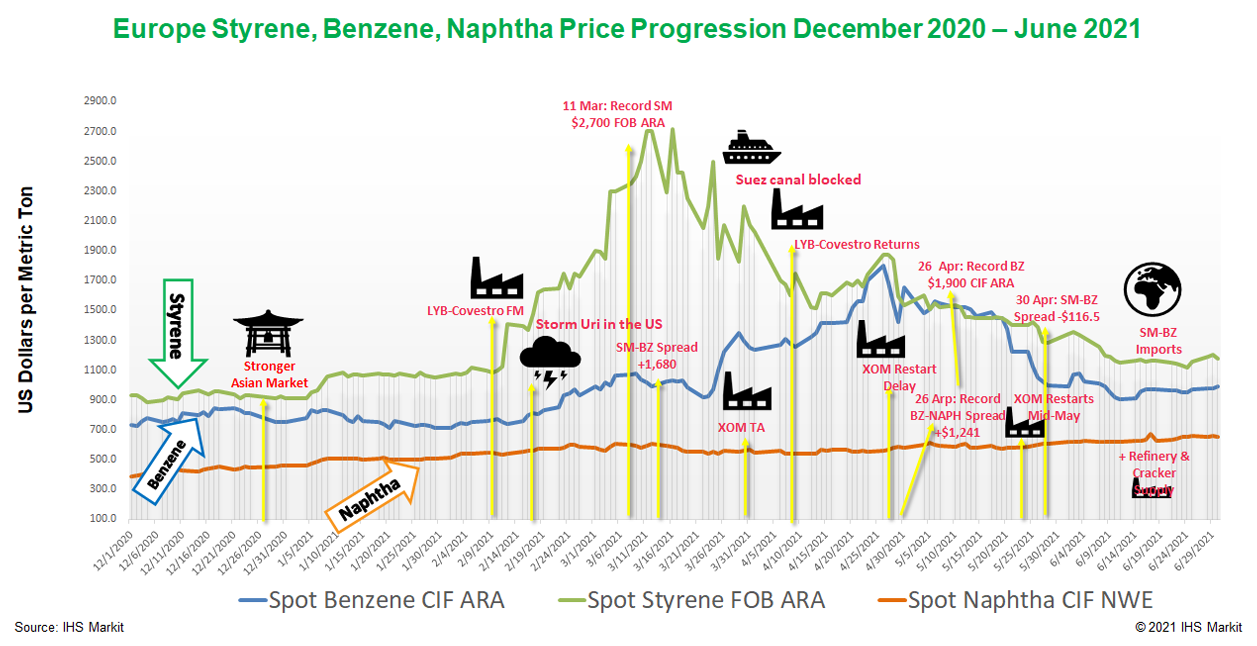 So at first, there was little indication of what lay ahead. While both styrene and benzene market players were aware that demand for the aromatics in Asia had strengthened since the start of the fourth quarter 2020, affecting Europe slightly, it was nevertheless viewed as a bubble that was expected to burst very quickly.

But as January progressed, the bubble didn’t pop. Market sentiment carried on heating up, driven by Asian demand for aromatics in the previous quarter that hadn’t eased off quite as expected. Styrene orders began backing up and delivery delays started multiplying, as supply chains and workforces struggled to cope amid social distancing measures and rising COVID-19 infection rates.

Styrene prices hiked all around the world, with planned and unplanned outages in Asia, the U.S., the Middle East and the wider European region starting to shorten supply. Even those producers who were running their plants at full tilt could not fill the gap, as they had sold out in advance.

Then in February, the spot European styrene market was hit with unexpected news.

Lyondell-Covestro, Europe’s biggest POSM facility, declared force majeure on styrene production at its Maasvlakte site in the Netherlands on February 11. Maasvlakte produces 680,000 mt/year of styrene, and the temporary loss of such huge supply sent shockwaves through the market, which was already short of material. Lost styrene production due to the force majeure wasn’t easily covered amid planned and unplanned outages across the globe.
“A two-week outage of a large styrene unit such as the one in the Netherlands means around 25,000 mt of lost production,” said Tobias Spyra, director of styrenics and polyurethane feedstocks EMEA at IHS Markit.

“The spread is huge. If you can’t make money now, you better close down.”

To make matters worse, Lyondell-Covestro had planned to take down the Maasvlakte facility for maintenance in March. The question many asked was: will the Maasvlakte plant come back to market before planned maintenance was due to start? That would provide at least some spot styrene material for the market. But nobody knew. Amid such uncertainty, by February 23 styrene reached $1,750/mt, from an average of $996/mt in January, according to OPIS data.

As styrene prices surged on the back of tighter supply in the region, the spread to feedstock benzene blew out to the highest since March 2017. Styrene spot prices were assessed at $567.50/mt above benzene on February 16. That was the widest spread since March 20, 2017, when styrene was pegged at $570/mt above benzene, according to IHS Markit and OPIS pricing data. Typically, a profitable spread is reckoned at around $200/mt, according to sources.

“The spread is huge. If you can’t make money now, you better close down,” said a source at the time.

“Only the ones who were able to run their plants could take advantage of the good spread,” said Spyra. “But this was the main issue, not everybody was running.”

Then the second spike emerged.

Between February 14 and 17, and before the European market could properly digest the sudden supply shock at Maasvlakte, winter storm Uri barreled across the U.S. Gulf Coast, shutting in output at a swathe of oil refineries and petrochemicals plants, including several styrene units. The extreme weather conditions were said to cause the deaths of at least 176 people and were touted by media reports as the costliest natural disaster of modern times.

Plant closures in the U.S. Gulf curbed cargo volumes earmarked for Europe, as U.S. producers had already reduced exports because of planned maintenance work or technical issues, according to IHS Markit analysts. This ratcheted pressure even further on styrene availability – and prices – in Europe.

“Europe on average imported around 30,000-35,000/month from the U.S. in 2020,” said Spyra. “But because of the storm, Europe only received 10,000 tons/month of styrene, according to global trade data available to IHS Markit.”
As spot styrene supplies in Europe tightened, prices accelerated higher still in the hope of bringing material to market. But Asia was too far away to meet demand for prompt cargoes. With the Middle East and Russia unable to send styrene by sea or rail to Europe on this occasion, according to Spyra, traders were obliged to hunt down product regionally, creating a perfect storm for upward price momentum.

“At the time, you couldn’t find benzene in Europe, for neither love nor money.”

The zenith was reached March 11 when spot styrene prices hit an all-time high of $2,700/mt. Market players, some furious and some ecstatic, depending on their position, couldn’t believe what they were seeing.

“The spot market was very thin, very few trades were for the incremental ton, but the problem is: it affected our contract price,” said a source. Even sellers reached their limit and didn’t want to push their luck. “The industry doesn’t like volatility,” a seller said. “$2,700/mt for styrene is bad longer term, as buyers will run away.”

As styrene rocketed, the benzene-styrene spread exploded out to $1,680/mt. That was a record level and triple the spread seen in February. Dynamics in the benzene market then started to shift, as demand for the feedstock strengthened, while supplies started to tighten.

ExxonMobil carried out maintenance work of several units at its Rotterdam petrochemical complex in Botlek, the Netherlands, removing approximately 65,000 mt/month of benzene production from the market. The Rotterdam aromatics plant is one of the largest aromatics production facilities globally and produces pure aromatics, such as benzene, orthoxylene, paraxylene and cyclohexane, according to IHS Markit data.

“At the time, you couldn’t find benzene in Europe, for neither love nor money,” said Simon Cleghorn, director consultant aromatics EMEA at IHS Markit. “So, what happens in this situation? Anyone with access to vessels starts to send benzene to Europe.”

And that’s just what they did.

“I brought in whatever benzene I could get my hands on in the global market," a source told OPIS.

Benzene cargoes were shipped to Europe from the U.S., Canada, Brazil, Mexico, southeast Asia, India, and the Middle East. Europe is thought to have received at least 140,000 mt in April, and still more in May and June, whereas monthly import volumes averaged 110,000 mt by comparison through 2019.

Ever Given blocks the Suez Canal for six days

By March, the aromatics market was ready for some respite from the series of price shocks. But then the third spike came in the shape of a massive container ship, four football pitches long.

For six straight days the world watched while frantic efforts got underway to refloat the ship that had wedged itself across Egypt's Suez Canal, blocking one of the world's busiest trade routes.

The Ever Given, a containership weighing some 200,000 deadweight tons and some 400 meters long, according to IHS Markit Commodities at Sea data, ran aground in the Canal on March 23. It was finally re-floated on March 29.

This blockage of the world’s biggest transit point for shipping – about 10% of global seaborne trade transited the Suez Canal in 2020, according to IHS Markit data – impacted market sentiment, driving up styrene and benzene prices. There were reports of delays to benzene and styrene cargo arrivals by up to two weeks. Material that was expected for early April was delayed until the middle of the month.

Still, aromatic prices had already reached their year-to-date peak, and once the Ever Given had sailed off and passage through the Suez had resumed, styrene’s pricing trajectory turned downward. Levels slowly started easing off, as imports from the Middle East, Asia, Russia and the U.S. arrived, giving the European market some much needed supply. By the middle of April, Lyondell-Covestro resumed production at Maasvlakte.

Yet there was one final twist in the tale of the aromatics market.

ExxonMobil delayed the return of its aromatics units at Botlek until the middle of May, instead of the end of April, at the same time as several other key producers in Europe reported unexpected benzene production issues. Once again, as supply chains started to falter, demand stayed robust. In addition, traders were starting to bid to settle the May contract price during the five-day pricing window. Prices for benzene started to accelerate.

“And so, the story from here is purely benzene driven,” said Spyra.

As benzene feedstock prices soared, so the spread to styrene then started contracting rapidly, before finally flipping negative. So it was actually cheaper to buy styrene on the spot market than to manufacture it with benzene already held in stock. While spreads were largely notional, as styrene deals were notable by their absence. By April 30, the spread hit a nadir of minus $117/mt, the lowest styrene had priced below benzene on record, according to IHS Markit data. Styrene producers decided enough was enough.

Europe started to draw in benzene from almost everywhere to meet demand. Spot European benzene supplies recovered and, as supply started to build and maintenance at several plants came to an end, benzene and styrene prices started to cool off.

By June, improved supplies, both from production and imports, helped balance the market. The shockwaves that had reverberated through the market for the first half of the year began to subside and pricing fell back towards seasonal trends.

After such a volatile first six months of 2021, dare we look ahead to the second half of the year?

The global outlook for styrene in H2 2021 is bearish, according to Spyra. Many plants are expected to operate as normally, with only a few planned turnarounds across the globe. Supply will increase amid further heavy capacity additions in China, while demand is expected to decline from its exceptional highs. With fewer planned maintenance works, different regions will supply one another in the event of any production hiccups.

For the benzene market, the supply–demand balance is likely to weaken through the second half of this year, according to IHS Markit. On the supply side, domestic benzene production at steam crackers is likely to increase towards the end of the year as naphtha feedstock starts to become competitive with gas feedstock, said Cleghorn. Domestic benzene demand in the second half of the year is unlikely to be a strong as in the first half of the year. This is mainly due to changing spending patterns but also due to an increase in benzene derivative imports, which have the potential to drive down domestic European benzene demand.

But whatever the future holds, many market players need time to recover after such a tumultuous start to the year, according to one trader interviewed for this report.

“I need a holiday,” he told OPIS. “I’m quite happy to sit on the sidelines for a bit – until the next crazy time!” 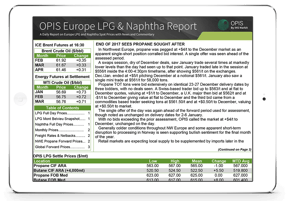