For the European benzene market, perhaps only the football World Cup (which most of us have been watching on our home screens, at night, wearing thick ski socks instead of shorts and sipping hot herbal teas instead of cold beverages in a pub) has been a rival in spectacle compared to this month’s tumultuous settlement of the contract price (CP).

A remarkable 43 spot benzene trades were reported to Chemical Market Analytics in the five-day pricing window that kicked off on November 23. This was an unprecedented level of liquidity in my 30-plus months of covering the European petrochemicals markets for OPIS, including benzene, styrene and toluene. (In 2021, around 19,000 tons of benzene traded during the December CP window.) The December CP was eventually settled and reported by the industry at $691 per metric ton (mt), marking a fall of $168 compared to November’s settlement.

It’s hard to know how many times one physical parcel exchanges hands. Interestingly though, during the CP window, typical roles can change, in that benzene consumers become sellers and producers become buyers. Sometimes, even, a market participant does both, and with the same counterparty. Traders are found on either side.

The churn rate of benzene

The ‘churn rate’ in commodity markets is referred to as the ratio between the volumes traded and the physical volumes consumed and is one measure of liquidity. The churn rates in chemical markets lag far behind those in the upstream energy markets. For example, a recent churn rate of crude oil was 27. That means for every barrel consumed, it was bought and sold on average 27 times.

By comparison, CMA data shows that in Europe the relationship between benzene consumed, and benzene traded on the spot market is between just 0.15 and 0.2.

That in essence means that even if a market player trades just 1,000 tons of benzene, it will likely, or rather often, have a noticeable impact on the market price.

“80-85 percent of benzene produced in Europe is sold directly to consumers and does not find its way to the spot market,” says Simon Cleghorn, a Director Consultant, Aromatics at CMA. Cleghorn was previously a participant himself in the CP negotiations during his 22 years of experience in the benzene and energy industry.

“Most benzene sales and purchases take the form of a direct producer to consumer relationship,” according to Cleghorn. “The reasons for this is that security of off-take, and security of supply is extremely important for producers and consumers, and there simply isn’t the risk appetite for producers or consumers to pursue sales or supply strategy predicated on a relatively illiquid (compared to crude, products, or gas and power) spot market alone.”

That leads to a situation where during the five-day contract price window, a minority of benzene market players, mostly traders, sells a small portion of benzene in the spot market, which goes on to largely determine the prices between all producers and consumers, including some of their derivatives.

One trader emphasized: “Without us there is no liquidity!”

“They organized it in a way for them to avoid price risk, and traders just play by those rules,” it added.

Although there is no legal or contractual obligation to use the contract price determined by the industry then reported to Price Reporting Agencies (PRAs) after the five-day window, some market participants are unhappy with this process.

“It’s just a reference point. But the reality is, that the reference point is used by almost all benzene market participants who negotiate pricing on a CP basis,” says Cleghorn.

How did the market get here? A little history lesson

The five-day contract price window is a mechanism that has been around for more than a decade, according to market experts with several decades of industry experience under their belt.

Before that, the benzene price was negotiated on a quarterly basis, then on a monthly bi-laterally basis or during a one-day window.

In the 80s “and way into the 90s” the benzene market negotiated a contract price once a quarter, and in Deutsch Marks – the pre-Euro currency of Germany. The price was accepted by market players based in other European countries.

“That price was always wrong, as there was a large variation between the CP and spot price,” says one source. It evolved to monthly negotiations, as it made more sense for refinery and cracker operators for benzene to move with their other products.

Over time, more benzene consumers and producers spiced things up and adopted the practice of linking CP to the five-day window.

“But it was supposed to consider not just the average spot price of the last five days, but factors such as inventory levels, unit outages, logistical constraints such as Rhine water levels, extraction margins, derivative margins, etc.,” says Cleghorn.

“There were around ten elements which were supposed to be involved in the discussions,” reminisced another source.

Fast forward to today, and the other nine factors are given little consideration. As such, the five-day spot average became the accepted de facto system, leaving some participants a little unhappy. However the market feels it can’t be disposed of, as many derivatives formulae are based on the benzene CP.

“The problem with the system is that there are no clear rules or no clear start or end of trading,” complains one source.

“If you’re an insomniac and by chance find a counter party at 4 a.m. in the morning, you can theoretically trade benzene at a price you wish,” the source added. There are no rules if a trade needs to be ‘repeatable.’

In the past, a broker was heard to have been woken up by two trading parties at 5 a.m. to work on a trade. While this information could not be confirmed, sources agree that benzene is increasingly discussed early these days.

“It won’t be long before they start doing the BZ CP at midnight,” a source commented.

Meanwhile, looking at the last few CP settlements this year, if you’re a seller you'd want to sell the first day when the price is strong and if you’re a buyer you'd want to buy the last day when the price is weak, according to a separate source. Though this month’s CP had the first day kick off with the highest trade concluded at $745 per mt, then prices subsequently lost steam the next three days, with trade levels falling to $620 per mt for December delivery, according to market confirmation. However, on the last day, prices shot up and a consumer sold a cargo to a producer at $730 per mt.

Despite its so called “flaws,” it seems the market lacks the appetite to negotiate a different price with twenty different parties.

The five-day contract price window provides a level of price transparency, so everyone has a good reference point for what competitors are paying or receiving, according to feedback.

“Nobody has the risk appetite to revolutionize the system. You may end up paying more for your benzene,” according to the same source.

Although another source believes, the uncertainty in 2023 may provide an opportunity for a “trailblazer or revolutionary” to change the system. “A different mechanism may manifest itself given all the uncertainty and headwinds for the industry. “But I guess we’ll have to wait until next year to find out.”

To stay on top of this key market, make sure you’ve got OPIS PetroChem Wire's
daily reports coming to your inbox! 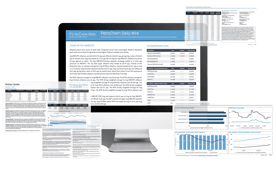 PetroChem Daily Wire provides closing prices and a summary of the day's trading activity for US ethylene, proylene, polymers and upstream NGLs markets. Begun in 2007, its olefins and polyolefins prices serve as benchmarks for a number of physical and swap contracts that trade on the CME/NYMEX Clearport system.