The differential to front-month Low Sulfur Gasoil (LSG) futures on the Intercontinental Exchange (ICE) for a diesel cargo delivered into northwest Europe has stayed above $100/metric ton since Oct. 12, as the difficulty of securing supply became evident for buyers. This premium reached a peak of $135.25/mt on Oct. 14, the highest ever assessed by OPIS of prices dating from 2015.

Refinery outages and strikes across Europe have hampered the continent's refining capacity at a time when many companies are no longer buying diesel from Russia following the invasion of Ukraine in February. An official European Union ban on Russian oil products will take effect from Feb. 5, 2023.

Industrial action in France has curtailed supplies from several refineries and depots. French oil major TotalEnergies was able to sign a wage agreement with the CFE-CGC and CFDT unions, but the hard-line CGT rejected the deal. TotalEnergies owns half of France's six refineries, of which two — Gonfreville and Feyzin — remained on strike as at Oct. 20.

"The situation is mental, it's a perfect storm," one market source said.

In the Netherlands, Shell has reported a malfunction at its 404,000 b/d Pernis refinery, the largest in Europe. Barge broker Riverlake Barging said that the problem was at Pernis' fluid catalytic cracker.

The strikes in France and the Pernis outage compound a regional autumn refinery maintenance program that includes planned stoppages at Repsol's Tarragona in Spain, Galp's Sines in Portugal and Eni's Sannazzaro in Italy.

Meanwhile, inventory levels across Europe have plummeted amid a market that has remained in backwardation — with front month LSG futures prices higher than those further along the curve — for over twelve months, enticing product out of storage for prompt sale.

The backwardated spread between the front two-month LSG future contracts has averaged $87.25/mt since the start of October, compared with a year-to-date average of $39.75/mt in 2022, and an average flat spread over 2021.

Industry stocks of middle distillates held by member countries of the Organisation of Economic Development fell to 239.3 million bbl in June, the lowest monthly level since at least January 2010, according to data from the International Energy Agency.

Each day, OPIS editors canvass the market for hard-to-track delivered premiums into ports across Europe. They also draw on exclusive shipping data for supply insight that covers import volumes into Europe, identifying key dynamics behind price changes. This insight and price transparency for the European spot middle distillates market is delivered daily in the OPIS Europe Jet, Diesel & Gasoil Report. 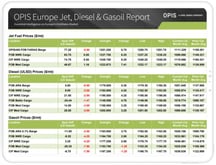