Drastically fewer miles are being driven due to stay-at-home measures to combat COVID-19, resulting in a decline in gasoline prices per gallon you can see just driving past your local filling station. But what about the price for a key component of your gas: ethanol?

Ethanol makes up typically 10% of every gallon of gasoline a driver puts in his or her tank, due to mandates set forth in the Renewable Fuel Standard. It’s worth keeping an eye on ethanol spot and rack prices amid Q1 and Q2 2020 oil market price volatility – or really any time.

Long before the word “coronavirus” was uttered in discussions – related to fuel or otherwise – or global oil price wars came to a head, ethanol producers had a similar output problem as OPEC.

That is to say, they were churning out ethanol. A lot of ethanol.

Last year was a watershed year for ethanol production. Production rates soared to 1.096 million b/d in the week ended June 7, 2019, just under the all-time high of 1.108 hit in December 2017, according to the Energy Information Administration. Seven weeks later, U.S. ethanol stocks approached 24.5 million bbl, which was an all-time high before COVID-19 sent inventories spiraling to well over 27 million bbl.

Due to this bearish supply picture, a typical Iowa plant spent most of 2019 realizing an average margin less than 5cts/gal.

“We finally reach(ed) that point where we were really producing more than we could even blend domestically and more than we could possibly even export abroad,” OPIS ethanol editor Jordan Godwin said in a recent episode of the OPIS Crash Course podcast.

Listen to the whole podcast here:

A glimmer of hope … just in time for coronavirus to land and devastate ethanol margins all over again. Margins tumbled deeply into negative territory, falling as low as 30cts/gal in the red in some cases.

“A lot of ethanol producers have had no choice but to slow rates, substantially idle their plants and even – in some cases – shut down entirely and lay off staff,” Godwin said. Production rates in mid-April were off by about 40%.

Now the Ethanol Supply Overhang Is Back – with a Vengeance

Because ethanol producers throttled back output in the latter portion of 2019, and margins staged a tidy recovery, suppliers turned the spigot back on at the start of 2020. In January and February, ethanol production rates neared nationwide capacity levels.

“And coronavirus really just became the final straw,” Godwin said on the Crash Course. “And since then, we've seen inventories push over 25 million, 26 million, even 27 million barrels for the first time ever. … What was already a pretty ugly situation in the ethanol industry and for supplies got a whole lot uglier.”

As COVID-19 demand destruction began to take hold, Chicago gasoline blendstock was valued 43cts/gal below the price of gasoline futures on the NYMEX – a five-year low for discounts.

Ethanol market watchers can beat this historic comparison. In the last week of March, an all-time historical ethanol price low was recorded in every spot region OPIS assessed. And throughout the week, the all-time lows only got lower.

The Chicago ethanol market – essentially the U.S. hub at the center of the heartland, where most corn is grown and ethanol is produced – stood out especially for Godwin.

“We've been tracking that market for nearly 17 years, at OPIS,” he said. “And we got to a level where we were like 30cts below the previous low that was set way back in 2003. So definitely uncharted territory.”

At the start of the COVID-19 crisis, U.S. gasoline retailers held onto a little hope.

That’s because the price they paid for gasoline at the wholesale rack followed the trends in the spot market – i.e., straight off a cliff, quickly.

The street price for gasoline often plays catch-up with prices at the spot and rack level – read more about that here. So, there was some profit to be made in the – albeit smaller – volumes moved at the pump.

Looking at certain areas in the Midwest and the Rocky Mountains in mid-April, rack prices for E10 gasoline (gasoline with 10% ethanol in it) fell into the teens in some locations. So, there was clearly room for money to be made.

But what about blends of fuel with more than 10% ethanol?

Let’s start with an important distinction: as cheap as ethanol got in the middle of April, it didn’t get as cheap as gasoline did. The price of corn, ethanol’s feedstock, kept prices from falling too far. For the first time in three years, ethanol held a price premium to gasoline.

Higher blends of ethanol-infused gasoline – like E30 and E85 – have a pretty big market in the Midwest and California. But, with the price inversion between gasoline and ethanol, they appeared priced out of the market.

If Ethanol Is an Alcohol, Is It Finding Another Market These Days?

Godwin noted that a handful of the approximately 200 U.S. ethanol producers have switched gears to being able to provide a medical-grade, pure ethanol that you can use as hand sanitizer.

But, that's only a handful. And Godwin was quick to point out that even in the current climate, there's no way hand-sanitizer use could hold a candle to fuel demand.

“And also, I should add, a lot of those producers have been donating that supply,” he added. “So, it's been kind of a nice story in this chaos.”

Never miss an episode of the OPIS Crash Course podcast.Click here to get episodes pushed to your phone. It's easy and free. 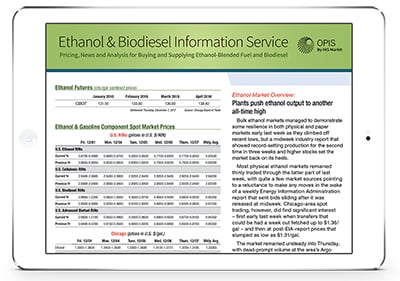