We can’t see into exactly what the future holds for US ethylene, but ethylene futures are now tradable at two of its Mont Belvieu locations.

The hub is connected to the joint-venture Enterprise Navigator Ethylene Terminal that was commissioned in January of 2020. The export terminal is an open system and has a variety of companies fixing a steady stream of ethylene exports to Europe and Asia depending on where arbs have opened. Five ethylene cargoes are scheduled to leave the Enterprise Navigator Ethylene Terminal during June.

The Enterprise storage hub is the third open system for ethylene storage in the US. The US ethylene system is largely otherwise private, meaning that producers and consumers have storage at their facilities, but do not lease it out for common usage. The existence of the hubs has enabled a robust spot market to develop for ethylene. The other two hubs are the NOVA hub at Mont Belvieu and the Choctaw hub in Louisiana. The CME launched a futures contract for the NOVA hub in 2009 (at the time it was known as the Williams hub).

Since trading began during 2Q 2020, prices at the Enterprise hub have generally stayed near those at the NOVA hub, but they have diverged a number of times as well, as the Enterprise hub has responded to global market conditions more directly than the NOVA hub has. The greatest variances have been when the Enterprise price was 9 cents below the NOVA price in March 2021 and when it reached a 7 cent premium to NOVA in April 2021. At this writing (June 11th), June ethylene is at 26.625 cts/lb basis MtB-Enterprise and at 27.25 cts/lb basis MtB-NOVA. 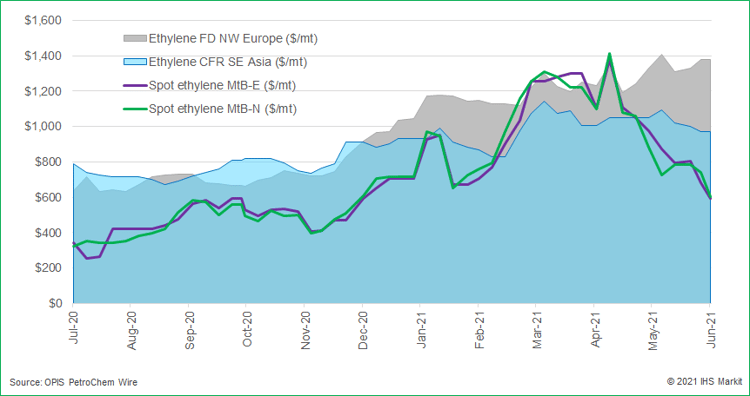 When a commodity “goes global” like US ethylene did in 2020, it affects more than the one market, as petrochemicals are a chain. A steady stream of ethylene exports from the US affects:

Essentially, adding ethylene into the possibilities of global reception inherently means that it is displacing products upstream or downstream of it. If a company that produces ethylene were facing an outage, it could import whatever the ethylene was being used to produce, such as polyethylene or PVC. Now, that company could import ethylene itself if that is cheaper than importing the plastic resin. If a company was considering importing feedstock NGLs or naphtha to increase its operating rates at its ethylene plant, now the company can import the ethylene itself if it is cheaper than the cost of production.

The current state of the US ethylene market is one of relative near-term strength. Forward curves for both NOVA and Enterprise ethylene have been backward for at least a year. This means that the highest price is the current month’s price. At this writing, 3Q NOVA ethylene is about 1 cent below June ethylene, while 3Q Enterprise ethylene is close to 5 cents below June. A backward market is typically an unusual state in more mature markets such as energy, because the assumption is that commodities gain value over time. This is not the case with ethylene, where today’s material is the most sought after; the cost of carriage is also mitigated by the backwardation.

The Mont Belvieu-NOVA futures contract launched in 2009 and does have open interest stretching throughout 2021 and 2022. The main purpose of a paper futures contract (one that doesn’t deliver material and is an exchange of money only) is to offset risk. If you are facing rising prices as a buyer and will see your costs increase and bottom line shrink, you can take an opposite position with the futures contract and make money in a rising market, so that your bottom line is protected from the financial loss you are expecting in the physical market. The typical companies that seek to mitigate risk are producers and consumers of ethylene or a product on the ethylene supply chain such as polyethylene. The Enterprise contract is also serving that purpose but can also mitigate risks faced by volatility in global ethylene markets themselves, as ethylene from this location can be directly linked to international prices. 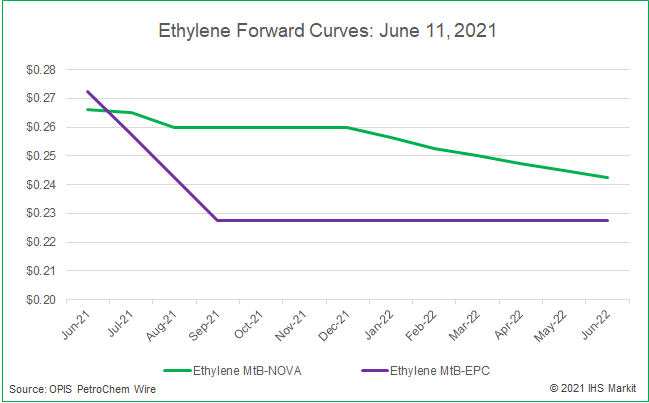 The opening of the new hub, the new terminal and now the launch of the new futures contract is another milestone for the US ethylene market, which has been actively evolving for nearly 20 years.

You can read about all US ethylene markets, including the daily trades and forward curves for ethylene at Mont Belvieu-Enterprise in the OPIS PetroChem Wire Daily Report. Click here to check it out.