Years of preparation for new IMO 2020 regulations by shipowners, refiners, traders – and anyone else involved in marine fuels – saw the volume button turned down by a crude oil pricing battle and the global spread of the coronavirus (COVID-19).

Questions during the runup to IMO 2020 implementation for very-low-sulfur (max 0.5%) fuel centered on availability, specification and pricing:

The market has become distracted from its prior focus on IMO 2020 due to global fuel demand destruction amid efforts to contain COVID-19 and a crude oil price war. But have bunker fuels been forgotten?

The answer is no. Here’s a look at the current market.

A couple of game-changing things happened during Q1 2020, impacting the oil market at-large and bunker fuels as well.

The world basically shut down due to the coronavirus. Meanwhile and Russia and Saudi Arabia (read OPEC-plus) could not agree on crude oil production cuts. Crude oil prices plummeted.

The overall oil price slide took its toll on Very Low Sulfur Fuel Oil and other marine fuels.  In Houston, VLSFO averaged $566.57/mt during the month of January.  The monthly price has declined steadily, as this chart of OPIS bunker fuel price data shows. 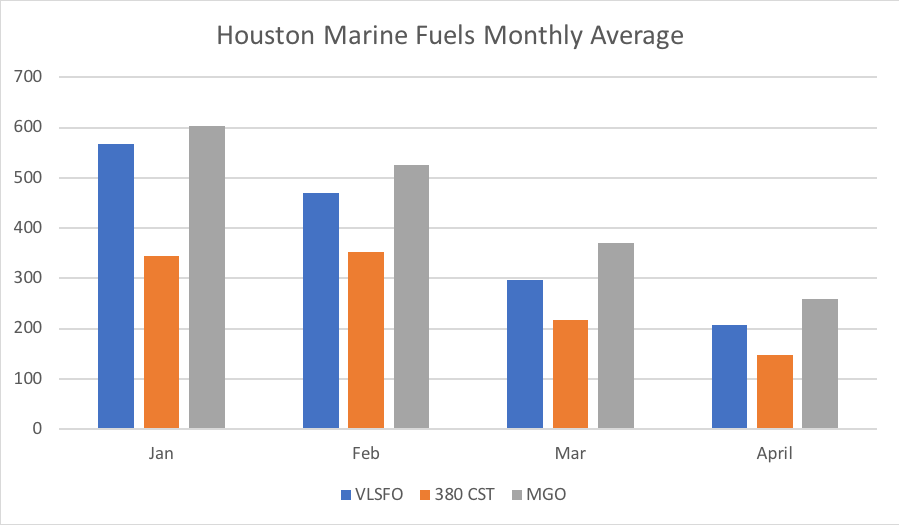 VLSFO has dropped alongside weaker crude oil, but there’s also been an influx of cheaper low-sulfur VGO into the pool.

Gasoline economics are terrible. In the past, refineries ran their fluid catalytic cracker hard to produce the most gasoline possible and low-sulfur VGO was desired feedstock.

Now, amid demand destruction, we are swimming in cheap gasoline. Maximizing its production doesn’t make sense, so refiners have been putting large amounts of low-sulfur VGO into the VLSFO market instead.

Crude run cuts mean less production of VGO and better (post-lockdown) demand could push transportation fuels prices higher. So, VGO could come back into demand for gasoline and diesel.

If you add the added value of processing VGO in a fluid catalytic cracker – about $5/bbl as of May 7 – VGO could be economically attractive for producing transportation fuels.

Bunker Fuel Prices Have Not Been Forgotten

What is clear is that the bunker market has a higher profile than ever before.

“U.S. refiners have found the [bunker] market again,” said one fuel oil supplier. “You can dump oil into, like you always could, but now you can actually make some money or, at least, avoid losing substantial amounts. This isn’t your father’s bunker market of used French fry grease or spent lubes.”

Also worth noting, the expected spread between VLSFO and HS 380 CST has collapsed substantially.

Most modeling and forecasting put the spread at $200-$250/mt. The VLSFO-to-HSFO bunker spread averaged $223.10/mt in January, and it was all downhill after that. The year-to-date spread average is $120.59/mt. Check out this chart for more detail, based on OPIS data:

Have you heard about the ship dead in the water because of off-spec VLSFO? Neither have we.

Heading into 2020, companies beefed up their legal and testing segments to head off what was expected to be a slew of fuel-related operational problems. While, there are always going to be quality claims floating around the marine fuel industry, large-scale issues have yet to materialize.

What the market continues to consider is:

The marine fuels market has been served a few curveballs in 2020, but even with those unexpected challenges, business has pushed on.