Chemical recycling, particularly in the U.S., was a dominant theme of the recycled plastics industry in 2022, and it’s creating new commodities from all manner of wastes that until recently had been considered virtually unrecyclable.

ExxonMobil Corp.'s move into chemical recycling is a good example of the trend as its plant at the massive Baytown, Texas, refinery complex started operations in December.

The facility takes in plastic rubbish coming from the U.S. East Coast, Mexico, Canada and elsewhere, and includes such unorthodox waste as used athletic fields made of artificial turf. The recycled products include oils and various refinery feedstocks, like naphtha.

Still, traditional "mechanical" plastic recycling, which dates back to the environmental movement of the 1970s and made recycling something of a household word, remains the default method.
Mechanical recycling typically is limited to high-volume plastics, like bottles, containers and food packaging, collected from residences and businesses and sold in bale form to recyclers that recycle the plastic into flakes or pellets for reuse.

One advantage of chemical recycling over mechanical is that it can recycle plastic waste referred to as "end-of-life," "landfill-bound" or "hard-to-recycle" into raw material for the production of chemicals, plastic and fuels.

Eastman Chemical continued work in 2022 on its $250 million polyethylene terephthalate (PET) recycling plant at its production facility in Kingsport, Tenn. The plant will use the company's "Advanced Circular Recycling technologies ... glycolysis or methanolysis" to recycle colored bottles, carpet, textiles and other landfill-bound waste into PET plastic pellets.

And Eastman in September said the company Interzero will provide up to 20,000 metric tons/year of "hard-to-recycle PET household packaging waste that would otherwise be incinerated" as feedstock for a chemical recycling plant that Eastman is building in France.

The recycled-plastic commodity that took the biggest hit in 2022 was polypropylene (PP) scrap bales, which are composed of waste plastic like stadium and yogurt cups, medicine vials and bottle caps.

Prices hit a 2022 high of 40cts/lb FOB in May 2022, but fell to 4cts/lb by late December. A huge buildup of PP bales, created by the increased use of optical sorting equipment by material recovery facilities, occurred as demand from recyclers fizzled.

The reasons behind the drop in demand weren't clear, but weak consumer demand affecting the food and beverage sector was seen as one possible reason.

The most heavily recycled plastic remained PET, where curbside bales, typically composed of bottles and containers collected from residences and businesses, fell by mid-August to a 2022 low of 7cts to 9cts/bl FOB east of the Rockies.

This followed a common pricing move in which warm weather increases demand for PET's primary use -- food and beverage containers and packaging.

Prices for recycled plastics commodities, such as bales and the post-consumer resin (PCR) pellets produced from them, could stagnate in the first quarter of 2023 if consumer demand doesn't pick up.

Consumer purchasing at many levels drives demand for the most heavily used plastic, including single-use bottles, containers and packaging. The auto sector is also heavily dependent on various grades of plastic, specialty and otherwise for a range of products. Airbags, for example, are dependent on nylon.

Most single-use plastic is made from PET, high-density PE, low-density PE, linear-low density PE, other PE grades, PP and, to a small degree, polystyrene, which is used to produce items like packaging blocks and garden containers.

On the demand side, there's increasing pressure to recycle more single-use plastic, particularly for consumer brand companies, which are looking to blend more recycled plastic into their products.
On a more fundamental level, the call to recycle more plastic is being driven by governments and environmental and consumer protection groups calling for creating a "circular economy" and reducing carbon emissions.

The chemical recyclers are playing a major role in this, but the volume they recycle compared to their mechanical brethren is fractional.

The new industry is also sorting out supply issues given that the plastic waste chemical recyclers use has yet to be commoditized and there is not yet a standard chemical scrap bale.

How to succeed in plastics recycling 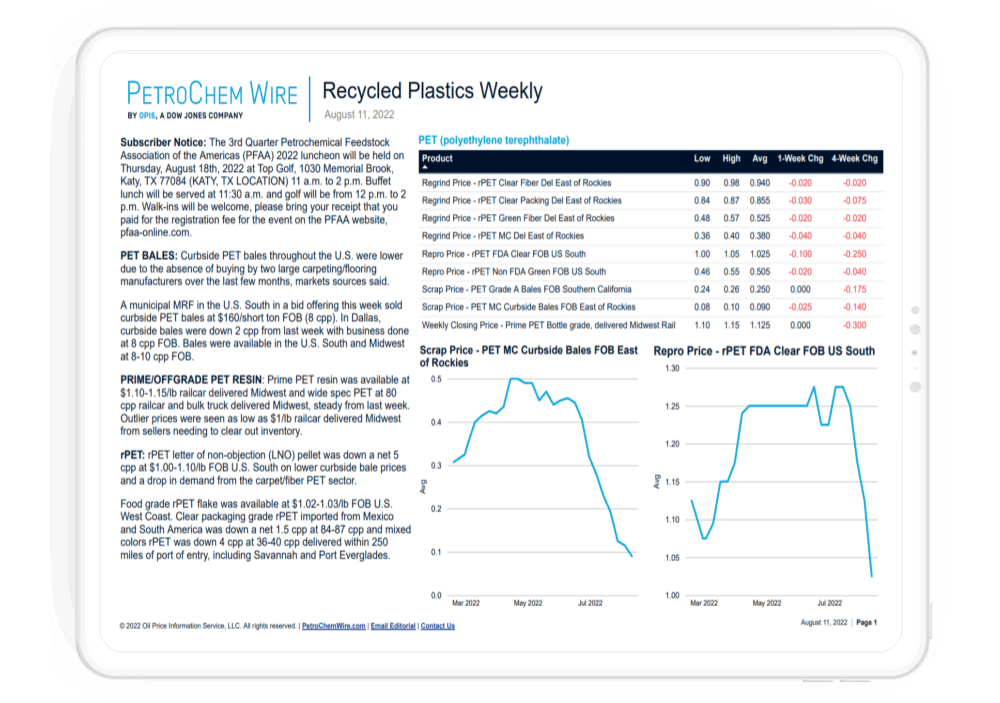 The key to profit in the growing recycled plastics industry is transparent pricing that provides a single frame of reference in a fragmented market.

From grades to delivery locations, PetroChem Wire's Recycled Plastics Weekly report standardizes a wide array of inputs for the current values and insights you need to succeed.