California’s LCFS: Just How Much Stronger Will the New Targets Be?

Prices for credits under California’s Low Carbon Fuel Standard (LCFS) have been a sad story in 2022. 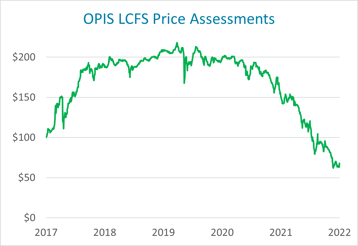 The credits slumped as low as $62 in October, and the 2022 average will likely finish around $100 -- if not below that -- barring a wild rally in December. The credits are down about 55% from the start of the year. With that kind of performance, if they were a company on the stock market, their CEO would be fired. If they were fuel prices at the pump, I’d be going on a whole lot more road trips, and if they were the price of cheeseburgers, I’d be a whole lot heavier right about now.

You get the idea -- in a year when everything got more expensive, LCFS prices are down bad.

The slump has been driven primarily by a tsunami of renewable diesel. For years, two major producers -- Finnish refiner Neste and Diamond Green Diesel, the joint-venture between Valero and Darling Ingredients -- reaped massive margins hand over fist by sending renewable diesel into California. Refiners heard about those margins and began converting diesel capacity to renewable diesel capacity. Now, the state is quickly getting flooded with the biofuel, which is chemically identical to traditional fossil-fuel diesel and therefore can be blended up to 100%.

The LCFS program is designed to encourage the use of low-carbon fuels by incentivizing those fuels with credits, while high-carbon fuels such as gasoline and diesel generate deficits. Obligated stakeholders are required to reduce the carbon intensity (CI) of their fuels by 10% in 2022, and renewable diesel is making that target way too easy to achieve, hence the cheaper credits. The program is working exactly as it was designed, but frankly, it’s working too well. Cheaper credits mean less incentive for new low-carbon fuel projects and innovation.

But don’t worry -- the California Air Resources Board (CARB) is here to save the day.

After months of hinting that they’re evaluating the possibility of strengthening the near-term targets out to 2030, CARB staff said in a Nov. 9 workshop that they have three “Preliminary Design Options,” to help inform their target-setting.

In the three alternative scenarios, CARB introduced CI reduction targets of 25%, 30% or 35%, all higher than the current target of a 20% reduction from a 2010 baseline by 2030. Perhaps more eye-opening, all scenarios featured an ultimate goal of a 90% CI reduction in 2045, an ambitious target that would better align the LCFS program with the state’s broader ultimate goal of achieving carbon neutrality in 2045.

The possible targets provide a glimpse of what CARB has in mind for the long-term future of the LCFS program, but right now, the market is asking, “What next?” Will CARB have time to quickly choose one of these options and finalize a new compliance curve before the 2024 compliance year?

“Well, if they don’t pass it for 2024, then LCFS prices collapse,” one LCFS trader warned. “It looks like it’s 2024 if you look at graph options, but they went short of committing that.”

So, if CARB picks one of these options in 2023, what’s the target in 2024? The program currently has an 11.25% reduction scheduled for 2023 and a 12.5% reduction slated for 2024. I grabbed CARB’s benchmark schedule graphic (seen above) and gave it a superzoom treatment to give a better idea of what they might have in mind for 2024.

I took a snippet of the top-left corner of the graph, where the three compliance curves each begin at the same point, added an image of a metric ruler to be precise, added the extra percentages on the left, and lo and behold, we see all three lines begin just below 16% -- maybe call it 16.25%. If that number sounds familiar to you, it’s the 2027 target, seen in the “Over-Performing” graphic above!

Is this what the market should expect for 2024? A 16.25% target reduction? That’d be a pretty steep jump from 11.25% in 2023, but it may just be the jolt the LCFS program needs to better balance the cumulative credit bank, which soared above 11 million credits at the halfway point of 2022 and will likely continue to swell in the near future without help from CARB.

“Because if it’s not starting in 2024, then you have the bank going up like another 5-10 million credits,” the trader said. “You won’t have enough bids to support that market.”

When I was a kid, I would play board games with my brother and sister, who were a few years younger than me. I’m not proud of this, but if I ever started losing, I would change the rules in my favor. If CARB changes the rules of the game and increases the near-term targets out to 2030, don’t be surprised if LCFS credit prices surge right back near the statutory limit of $200 in 2016 dollars, adjusted for inflation. That figure is $239.18 in 2022.

Will we see prices soar under stronger targets? For the answer, here’s some wisdom from Britney Spears in her 2000 hit, “Stronger”:

“You might think that I won’t make it on my own, but now I’m stronger than yesterday. Now, it’s nothing but my way.” 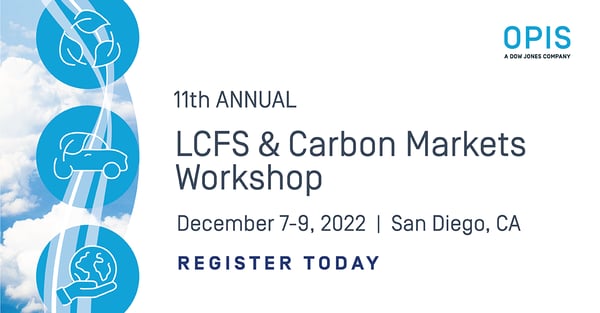 The 11th Annual OPIS LCFS & Carbon Markets Workshop is the premier event for professionals involved in carbon reduction industries. From December 7-9, 2022, in San Diego, attendees will learn the latest in regulatory and market developments through a carefully crafted agenda filled with experts from the California Air Resources Board, Oregon Department of Environmental Quality, Washington Department of Ecology, American Coalition for Ethanol, Neste, BTR Energy, Weaver, and so many more.

Beyond the critical content of the sessions, the networking opportunities alone make this a must-attend event for players in the space.