Carbon Credit Costs for California Gasoline & Diesel: A Heads Up for U.S. Suppliers

It’s no secret that California is routinely the most expensive place to buy gasoline in the continental U.S.

A number of factors contribute to the disparity between California and markets East of the Rockies, including its comparatively high state gasoline taxes. California also requires a boutique blend fuel, and its refineries are geographically isolated, both of which hamper resupply in instances of refinery issues and often send prices soaring.

California has various environmental regulations that ultimately impact gas prices, but one high-profile state-run program that fuel buyers frequently see appear as a cost on their invoices is California’s cap-and-trade program.

Fuel suppliers that don’t deal in California might be inclined to ignore the state’s cap-and-trade program, but at their peril—it could serve as an important learning opportunity if and when carbon programs are adopted elsewhere.

There are multiple proposals for similar programs in other states, including the Transportation Climate Initiative (TCI), which has the potential to bring transportation fuels under a cap-and-trade program in 12 Northeast and Mid-Atlantic states and the District of Columbia, with compliance obligations beginning as early as 2022.

The cap-and-trade program was derived from the passage of Assembly Bill 32 in 2006 by then-governor Arnold Schwarzenegger, which requires California to cut greenhouse gas emissions to 1990 levels by 2020.

Under the program, which is run by the California Air Resources Board (CARB), obligated parties are required to surrender “compliance instruments” (either carbon allowances or offset credits – more on that later) equal to their estimated carbon emissions. As a design element of the program, compliance instruments become more scarce moving forward, in turn increasing their individual value and the costs for obligated parties to comply. The ultimate goal is to send a price signal to polluters to incentivize investment in cleaner fuels and more fuel-efficient sources of energy.

The program first took effect in 2013, installing compliance obligations for electricity generators and large industrial facilities, and linked with Quebec’s cap-and-trade program in 2014, under the Western Climate Initiative (WCI).

Suppliers are subject to cap and trade obligations if they “hold inventory position of fuel in the bulk transfer/terminal system, or import fuel into California outside the bulk transfer terminal system,” according to CARB. Suppliers that import or deliver fuel in California with 25,000 metric tons (mt) or more of annual carbon dioxide equivalent (CO2e) emissions are covered under the cap and trade program.

For California, this means that wholesalers of transportation fuel at the rack level would have to pay for the cost of emissions if their gasoline sales alone reached above 2.8 million gallons per year or if just their diesel fuel sales reached above 2.45 million gallons per year, or a combination of both. That’s a minimum annual compliance cost for rack fuel suppliers of about $400,000 for gasoline sales alone or about $509,000 for diesel fuel sales alone.

The primary compliance instrument in California’s cap-and trade program is the California Carbon Allowance (CCA). Allowances are auctioned off by the state in quarterly events, and free allowances are allocated to covered entities with consideration to various factors, including how cap and trade compliance costs may impact their ability continue to operate in California.

CCAs are also sold on the secondary market as well, with the Intercontinental Exchange (ICE) the primary platform for trades.

Covered entities can also use offset credits to comply with their cap and trade obligations. Offset credits are generated by offset producers from emissions reducing programs such as methane capture and forestry projects. Offsets generally are cheaper than CCAs, but make up a smaller piece of the pie, given that entities can only use offsets to satisfy 4-8% of their compliance obligation, depending on the year.

OPIS provides daily price assessments for both CCAs and carbon offsets traded in the secondary market.

In general, transportation fuel suppliers attempt to recoup the costs associated with complying with cap and trade on wholesale fuel invoices. These costs my be displayed as a line item, or “baked into” the total cost. Learn more here.

Many fuel suppliers use the OPIS Cap-at-the-Rack (CAR) prices to determine a fair, transparent estimation of cap and trade costs on a per-gallon basis for this purpose.

The OPIS CAR price is determined for each transportation fuel type, taking into consideration the specific fuel’s CO2e value (a measure of global warming potential) designated by CARB, along with the OPIS assessed price for CCAs trading in the secondary market each day.

Notably, CO2e values vary significantly by fuel type. CARB diesel fuel’s CO2e value is higher than CARB gasoline, and the CO2e value for biodiesel varies depending on the blend. Ethanol also has its own CO2e value, which is factored into the CAR price assessments for finished gasoline.

So how much per gallon do cap and trade compliance costs raise the per-gallon cost of fuel?

At the start of 2020, the OPIS CAR price for CARBOB was 14.23cts/gal, and 18.12cts/gal for CARB diesel, reflective of prompt-delivered CCA prices in the secondary market of around $17.70/mt.

CAR costs represented about 4% of the total average California retail regular gasoline price at the time, which was around $3.55/gal.

For diesel, CAR costs made up about 4.6% of average retail prices around $3.93/gal, per OPIS data.

At the start of 2015, when obligations for transportation fuel suppliers began, the OPIS CAR price for gasoline was around 10.20cts/gal, with CARB diesel just under 13cts/gal, considering prompt CCA prices in the secondary market of about $12.65/mt.

Important note: The COVID-19 pandemic’s impact on global financial markets has touched cap and trade markets as well. Stay-at-home orders, which have been particularly tight on the West Coast, have drastically decreased fuel demand and are likely reducing emissions from shuttered non-essential businesses as well.

This, in turn, has the potential to reduce 2020 cap-and-trade obligations and allowance demand. In response, CCA prices have been exceptionally volatile over the past two months, dropping to multi-year lows before rebounding, although they still remain significantly lower than where they began the year, and below the 2020 allowance auction reserve price.

What is the Low Carbon Fuel Standard?

The cap and trade program is not the only environmental regulation that fuel suppliers consider in California. Separately, the state administers its Low Carbon Fuel Standard (LCFS) program, which comes with its own compliance costs. Talk of cap-and-trade, particularly to anyone looking from the outside of California in, tend to get blurred with LCFS, so let’s take a look at that as well.

It’s important to note here that other states, such as Oregon, have implemented clean fuels programs like LCFS, with other jurisdictions eyeing similar programs as well. So, again here, California can serve as a valuable learning opportunity for all fuel suppliers.

California’s LCFS program was approved in 2009 and implemented in 2011 in an effort to reduce the overall carbon intensity (CI) of transportation fuels consumed in-state by 20% from 2010 levels by 2030.

The LCFS program covers refiners, importers and distributors of gasoline, diesel and biofuels. For each fuel produced or imported, a carbon intensity (CI) number is calculated, using a model developed for California that considers the entire life cycle of processes involved in making, shipping and storing that fuel. For fuels under the CI target for that year, the owner of that fuel accrues credits in the LCFS. For fuels over the CI target, the owner has an obligation that can be met by buying credits.

The program does not mandate, nor prohibit, specific fuels nor require fuels to meet a particular specification. However, the CI calculations do encourage the production and import of low-CI fuels (because they earn more credits), such as ethanol made from sugarcane in Brazil or renewable diesel.

As the targets have escalated in recent years, the generation of deficits has frequently outpaced credit generation, drawing from the substantial bank of credits from the earlier, less stringent years of the program.

With the credit bank tightening, prices in 2019 rose near the effective price cap of $213.07/credit, and CARB took action by bolstering the LCFS program mechanism is capping prices and preventing them from spiraling out of control.

Click below for more information about how OPIS offers clarity on environmental compliance costs, not only in California but in markets across North America. 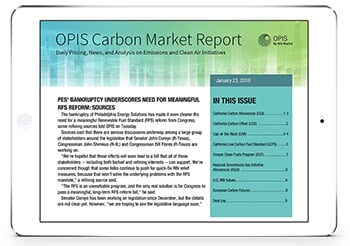