The First Driver of the 2021 Motor Fuel Panic

In mid-April, a special report by Oil Price Information Service (OPIS) sounded an early warning signal for gasoline. Subscribers were told that for the first time in four years, the US gasoline distribution system might be hard-pressed to keep stations "wet." In the jargon of downstream distribution, staying wet means never running out of fuel.

The prospect of dry stations came after spring break delivered occasional scattered outages of fuel in popular destinations in Arizona, Florida, and a few other states. It also came despite seemingly adequate supply as well as national demand that trailed 2019 levels by 10% or more.

OPIS' original reporting detailed that thousands of drivers of tanker trucks left the work force in 2020 thanks to the COVID-inspired demand destruction as well as health issues in the pandemic. A typical pre-pandemic day might see 50,000 or more transport trucks on the road, each delivering about 8,000 gallons of gasoline and/or diesel to downstream fueling stations.

Thousands of drivers left that workforce, or retired, or moved to the less stressful realm of delivering goods ordered online. The closure of driver training schools, meanwhile, choked off the pipeline of new haulers. The loss wasn't noticeable during the demand slump since transport truck shipments slipped to 25,000 to 30,000 deliveries per day.

"There has been a driver shortage for a while, now the problem has metastasized with the pandemic," noted Ryan L. Streblow, executive vice president of the National Tank Truck Carriers industry group. "It's going to be a problem for shippers, carriers and consumers across the board."

Beyond the dearth of drivers, there is another element of recent years that merits upfront attention. Gasoline demand has become extraordinarily "lumpy." In 2019, the Energy Information Administration (EIA) showed weekly gasoline supplied as low as 8.565 million b/d and as high as 9.9 million b/d. The breadth between the low and high demand tides in 2020 was a never-before-seen 4.63 million b/d. Already in 2021, a gap of about 1.7 million b/d has separated the extremes and more variability may lie ahead thanks to a surge in pent-up vacations and "social driving."

OPIS analysis published on May 21 underscores the issue and highlights the flaws in EIA data. The Weekly Petroleum Status report on May 19 implied a weekly demand surge of just 4.8% during the panic-laced week where millions of motorists topped off tanks in states impacted by the Colonial Pipeline shutdown. EIA does not measure actual sales but instead estimates inventory moving from primary or reported storage to secondary or tertiary destinations (stations, small bulk tanks, and cars). OPIS calculated a week-on-week volume surge in a similar period at 8.5%, a consumption spike about 77% above that implied by EIA. The persistence of outages in the week ending May 21 indicates that this week could see another large inventory drawdown and the highest gasoline demand reading since the Pandemic.

The week leading up to Memorial Day Weekend may also be problematic. Dramatic fluctuations in behavior can be created by the viral contagion that spreads via the "They Say..." prophesies in social and standard media that are never clearly sourced.

"They say we're going to run out of gasoline" mantras provoked tank-topping behavior in states hundreds or even thousands of miles away from Colonial Pipeline infrastructure. Once that viral behavior spreads, common sense and facts have little influence. Witness the surge in gasoline consumption in southern counties of the Florida peninsula this month, a region which gets its fuel exclusively via barge or cargo ship.

The good news near-term is that Memorial Day Weekend is not so much a launch date for peak driving season as it is a dress-rehearsal for the 12-13 highest consumption weeks, which tend to occur between the summer solstice and Labor Day.

With the notable exception of 2019, the three weeks following Memorial Day Friday saw significant declines in gasoline demand. Six years ago, the drop was spectacular with demand sliding 756,000 b/d in the first June week. Smaller declines were measured from 2016-2018. 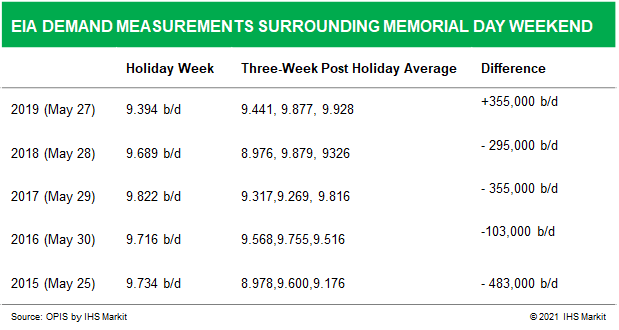 This year, the potential for an immediate June swoon in demand appears high. Panic behavior by motorists in the last half of May is no doubt "borrowing" from the ratable gasoline demand one might see in the first summer month.

Days' supply are calculated by simply taking the amount of motor fuel in primary U.S. storage, and dividing that figure by recent demand, with a four-week average consumption level one of the favorite measuring tools. Using that methodology, days' supply of gasoline has ranged between 26.2 days and 27.4 days since spring began, hardly hinting of any snags at the pump. The last year has seen some refinery closures that have lopped off about 1 million b/d of processing capability.

But some other statistics speaks to the "funhouse mirror" nature of days' supply optics.

Back in 1981, for example, the U.S. population was measured at just under 230 million people. More recently, the population topped 331 million. Back in 1981, the US stored about 253 million barrels of finished and unfinished gasoline, or approximately 46.3 gallons per person. Gasoline storage last week was just over 234 million barrels. When compared to the population, there was about 29.7 gallons per person, a reduction of nearly 36 percent.
Just-in-time inventory practices have been the standard treatment for gasoline distribution for most of the last four decades. The practice made sense given the buildout of logistics, and the addition of about 4 million b/d of refining capacity from 1985 to 2020. Using the circulatory system as a metaphor, the U.S. had a much bigger heart and better arteries and veins.

But interruptions in supply (or demand as in 2020) can provoke extreme tides. By historical standards, the US gasoline distribution system is shallow, with a morphology similar to the famous Canadian Bay of Fundy, known for its tidal extremes.

And beyond those statistics, there are limits to what the distribution system can do when panic strikes the motoring public. The panic buying of mid-May 2021 was reminiscent of the hoarding during the Iranian Revolution of 1978-79 and the Arab Oil Embargo of 1973-74. Example: This month saw motorists follow transport trucks from terminals to gas stations and queued in lines absent since the era of bell-bottoms and classic rock.

There may be more than 26 days' supply of gasoline, but much of it is inside of refinery gates or was temporarily trapped during the Colonial downtime in pipelines and breakout storage tanks. (Note: those pictures of multiple steel tanks holding Colonial gasoline in Greensboro, NC are compelling, but none of the tanks can offload to transport trucks!)

And the distribution system was never set up to supply several days' supply in a single 24-hour period.

Some quick arithmetic illustrates the problem.

A conservative estimate suggests about 280 million light duty vehicles in the U.S. that are fueled by gasoline. A ballpark number for tank ullage (the empty space left in a tank for fuel) might be 15 gallons. Hence, if a panic provoked everyone to fill up, the demand would be around 4.2 billion gallons, or 100 million barrels, translating into about 11 days' supply based on the bulk inventory estimates. Put another way, panic buying or hoarding of gasoline can lead to more than ten times ordinary demand, creating thousands of station outages in its wake.

Conclusions and Predictions for Summer 2021

OPIS is able to provide comprehensive and in-depth historical analysis because it has a database of price history going back to 1980 for spot pricing data for gasoline, diesel and NGLs and 1995 for wholesale rack pricing for gasoline and diesel. You can easily access this same database for use with your analysis. TimeSeries is OPIS’ historical price database allowing on-demand access for users to pull historical price reports. It houses spot and wholesale rack prices for several energy commodities. Gasoline, diesel, NGLs, resid, feedstocks and futures history is available. Start a free 10-day trial and see for yourself.

Monitor volumes to discover the impact of fuel sales from supply disruptions.

Gain the advantage in your market by discovering and understanding localized sales trends including volume performance and profitability. Based on actual retail fuel sales data collected directly from station operators, DemandPro provides an accurate snapshot of weekly fuel sales to measure performance.