As oil companies start to transition away from their fossil fuel businesses towards greener forms of energy, question marks surround their strategies.

I spoke with Cepsa’s commercial and clean energies director, Carlos Barrasa, a former BP executive who is now guiding the Spanish company along the path to energy transition.

In the conversation, Barrasa outlined his view on how the SAF industry will develop. Although this biofuel is currently more than twice as expensive as traditional jet fuel, he believes that prices will steadily converge and that costs won’t be the main issue in the long-term.

OPIS: What is Cepsa’s strategy for the energy transition?

CEPSA: We have promised to transform Cepsa into an energy transition benchmark company, into an example of how a company can move from traditional models to decarbonized ones. We have pledged that more than 60% of our business in 2030 will come from sustainable sources, specifically, from biofuels, hydrogen, electric vehicle chargers and convenience stores at fueling stations and forecourts.

Hydrogen is an important pillar of our strategy, and it will become [even more] significant at a later stage. We have also pledged to develop a 7GW portfolio of renewable projects for internal power consumption, mainly at our energy parks and hydrogen projects.

OPIS: Sustainable aviation fuel, or SAF, is an important part of Cepsa’s strategy going forward. How do you see SAF costs evolving as economies of scale kick in for production?

CEPSA: Right now, SAF is only produced in very small volumes at pilot facilities. Significant volumes of SAF uptake will kick in between 2024 and 2026, when the use of SAF starts to become mandatory for airlines. Our goal at Cepsa is to become a significant player in this industry and help our clients decarbonize at the lowest possible cost. We think that there will be a green premium for these SAF products, which will steadily converge with traditional jet-kerosene prices.

The SAF market will of course operate on a supply-demand basis. From 2025, supply will increase dramatically because several plants will be commissioned from that year. As for demand, [European] legislation requiring aircraft use 2% SAF in their fuel mix will take effect from 2025, with mandatory consumption targets increasing gradually until 2050. Supply and demand will set the price.

As [waste oil] feedstock supply is likely to be relatively constrained, we are researching more abundant feedstock types such as lignocellulosic biomass [plant or plant-based material, which mainly includes agricultural residues, energy crops, forestry residues and yard trimmings]. This technology is still in development, but there are pilot production plants.

In addition, in parts of northern Europe, some in the industry are betting on e-Fuels [produced from renewable energy, water and carbon dioxide], which is a different set of technologies related to waste re-gasification. This opens a door to a bigger set of different types of waste products that can be used, where feedstock costs are significantly lower. The problem is that e-Fuel technology itself is very expensive.

Therefore, there is a trade-off between high feedstock cost and low capex in the dominant technology of SAF production [the generation of biofuels from waste oil] versus future technologies such as e-Fuels that involve relatively low feedstock prices but very high capex.

OPIS: Do you expect any of the SAF technologies to become the industry standard?

CEPSA: I think they will all co-exist because they offer different advantages. The currently dominant SAF technology will prevail in the next 10 years, affecting market prices while moving the airline industry towards decarbonization. Meanwhile, lignocellulosic and e-Fuels technologies will continue to develop, with the former appearing towards the end of this decade, and e-Fuels from 2030 onwards.

OPIS: Where do you see that green premium for SAF compared with jet fuel?

CEPSA: Right now, it’s around 2.5 times as expensive. In the future, it will depend on the supply-demand balance, which will in turn rely on the availability of feedstock and regulation. A target of between 1.5 and 2 times as expensive in the medium term should be within reach.

In addition, the aviation industry is improving engine efficiency. A new aircraft burns half as much fuel as an old one. Therefore, even if it seems crazy that a company might pay twice as much [for SAF] as it would in comparison to jet-kerosene, the deployment of new aircraft engine types will still allow them to halve fuel costs.

Personally, I’m optimistic. I think cost won’t be the industry’s issue in the long term. The main issue will be the professionalization [in terms of commercial and business practice development] of the feedstock origination and waste collection industry.

OPIS: I’m very interested in the commercial and professional development of feedstock suppliers in the SAF industry. As feedstock demand grows, what concerns do you have over who you source these products from?

CEPSA: I believe that in the long term there will be a commercial development of feedstock suppliers, along with a re-structuring and potentially a consolidation of this industry. In that regard, as the sector professionalizes, we will see an increase in feedstock supplies compared to what we have today.

We have a very strict screening process on the companies we work with because we care about the reputation [of the supplier] and the origin [of product]. Individual [feedstock] deliveries are tracked.

We are in a stage comparable to that of the automotive industry when it began generating supplier ecosystems. We need to implement more quality control processes at biofuel production plants to ensure that feedstock suppliers meet quality and consistency standards. The SAF industry is still in its early stages.

OPIS: And finally, stepping back from SAF to a wider look at the energy transition, when do you see fossil fuel consumption starting to fall significantly in Europe?

CEPSA: Europe has clearly decided when that will happen from 2035, when internal combustion engine vehicles will be banned. Depending on how much and how quickly countries electrify [road vehicles], fossil fuel consumption will decline sooner or later.

But, if you add a road vehicle-life average of 10 years to the date of the ban in 2035, I’d say that volumes will begin to fall significantly from 2040.

Each day, OPIS editors canvass the market for hard-to-track delivered premiums into ports across Europe. They also draw on exclusive shipping data for supply insight that covers import volumes into Europe, identifying key dynamics behind price changes. This insight and price transparency for the European spot middle distillates market is delivered daily in the OPIS Europe Jet, Diesel & Gasoil Report. 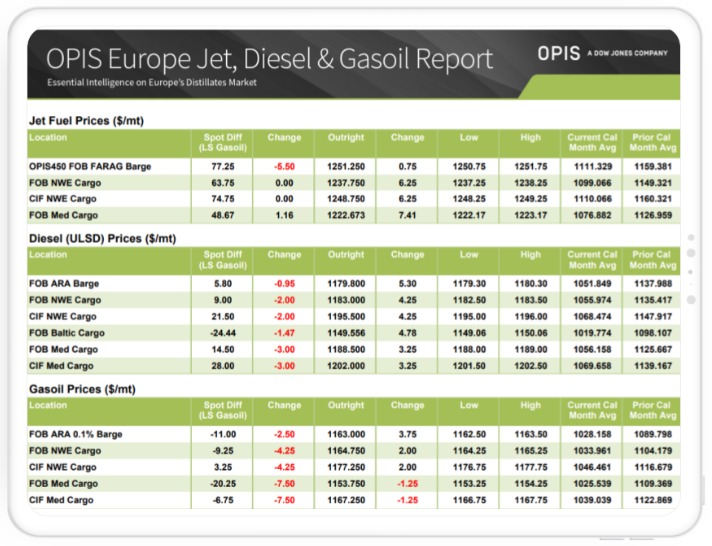 Our experienced editors and analysts are uniquely positioned to deliver the best full-day intelligence on Europe’s middle distillates market – helping you to remain profitable.