The US national average for gasoline as measured by OPIS on Dec. 12, 2022, represented deflation of 2.02% versus the same day 2021. It’s the fourth consecutive deflationary day after a span of 654 days where gasoline was more expensive than year ago levels.

Today’s national average price of $3.262/gal represents the lowest price of 2022 but lower numbers are likely for the foreseeable 2022 future. One has to go back to October 8, 2021, to find a cheaper average US gasoline price.

Of course, the final box score for 2022 gasoline prices won’t be available until New Year’s Day 2023. But OPIS analyzed over six billion data points in our extensive historical database and rendered observations, some of which make 2022 unique, but others that fall in line with previous years this century.

Some of the numbers lead to counterintuitive discoveries.

Example: Most marketers might think that 2022 will deliver a national average well above $4/gal, since the memory of a $5.015/gal national average is fresh. But unless there is a dramatic trend shift over the last 23 days, the country will fall several cents short of a $4/gal average. A $3.25/gal average for the rest of the year would result in an annual average just shy of $3.97/gal, and wholesale numbers point to further erosion from today’s $3.262/gal national number.

The final number will indeed still set a record for any year, without an adjustment for inflation. One can make a strong case that the 2012 annual average of $3.6035/gal counts as a more expensive year when adjusted for disposable income. 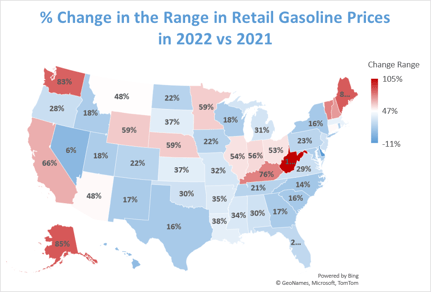 The last days of 2022 will also probably determine the amplitude of this year’s volatile retail picture. No one can contest the high, which occurred on June 14 when the national average hit $5.015/gal. But the early 2022 low of $3.2864/gal on January 1, 2022, was eclipsed over the weekend and pump prices may well flirt with $3.15/gal by year’s end. A final reading of $3.15/gal would amount to $1.865/gal separating the low and high extremes.

In comparison to the wild 2022, the early part of the millennium saw relatively tame pricing.

Some other observations on an historical day:

Currently, it's difficult to look forward and not expect gasoline deflation to continue for the first few quarters of 2023.

Sloppy gasoline markets look almost certain for next month, and February will see the one-year anniversary of the Russian invasion of Ukraine. 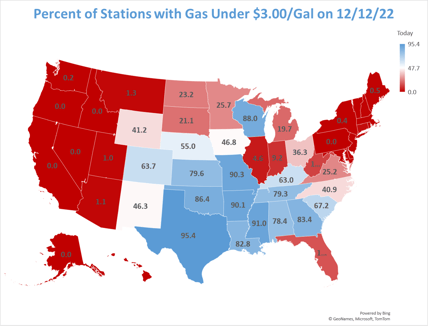 Unless there is a drastic recovery in crude prices or gasoline, deflation looks likely to have a minimum seven-month grip on the country. A June 2023 price average of $3.54/gal, for example, would amount to a 28% year-on-year decline and match the performance in the deflationary years of 2009 and 2015.

Grade your retail fuel station profit performance against key competitors in any market. Get an exclusive look at margins over time for competing brands and price leaders with OPIS MarginPro. 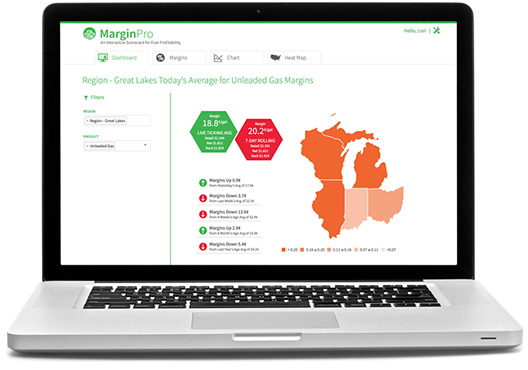