Gasoline, diesel and jet fuel prices have been volatile in 2019. From political rhetoric to fundamentals, this year is shaping out to be a tumultuous one for oil markets.

Refinery downtime has played a key role in rallies seen throughout the country, with a sharp spotlight focused on U.S. West Coast gasoline markets, where retail prices surged past $4/gal this spring.

The best way to get a clear picture of what is driving regional market dynamics at the retail gas pump is to take a few steps back on the supply chain – to the major spot markets for gasoline and diesel and jet fuel.

And if this piques your interest, get our editor's full midyear update. 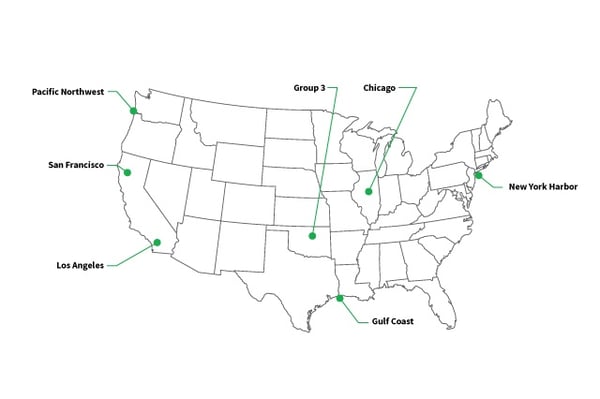 This year started with near-record levels of inventories of Gulf Coast gasoline, thanks to high refinery utilization rates in the early winter. But the first quarter of the year saw a slew of refinery maintenance issues, planned and unplanned, that cut production levels and drove down stockpiles.

Refineries in the region hit 97.7% of operational capacity in the first week of the year. That number, though, fell steadily through the first few months of 2019, hitting a low of just 87% in mid-March.

Those numbers aren’t necessarily different from those of prior years, on the surface, with the percentage of utilization rates dropping about 10 percentage points for first-quarter work over the last few years.

That same 10% drop has meant more and more operational capacity seeping from the market.

Spring planting season, which usually takes place as early as feasible each spring, has been delayed and drawn out in the Midwest market this year, taking its toll on diesel demand.

As of April 28, 25% of corn crops in Kansas were planted, 15% in Nebraska and 47% in Missouri, according to the United States Department of Agriculture. At the same time last year Kansas was at 36% planted while Nebraska was 23% and Missouri was 55% planted.

“A lot of places (farmers) can’t even get out in the field, there are huge ruts in the field from the wet fall and they can’t get out there to fill those ruts in and begin planting because of the extra wet winter and spring,” a market participant said.

Whereas in previous years, Group 3 “X-grade” ULSD basis differentials might have seen a sudden surge in demand, this year has seen a protracted planting season with no “big bang,” another source said.

“A lot of fields are still covered in water, you just got snow in the upper Midwest,” that source said. “I don’t think diesel has (performed) much at all.”

An additional participant said they thought demand still had time to hit.

“People will plant, things will eventually clear up,” the source said. “It’s not as strong an outlook people may have been expecting.” But, there’s still time, they said.

In an April 8 filing, Buckeye sought approval from the Federal Energy Regulatory Commission (FERC) to convert Laurel Pipeline into a two-way bi-directional pipeline which would accommodate both west-to-east service to Altoona, Pa., and east-to-west service to Pittsburgh, Pa.

Buckeye had initially proposed the bi-directional plan last year, after its prior proposal of a full reversal between Pittsburgh and Altoona was rejected by the Pennsylvania Public Utility Commission (PUC).

On April 23, a coalition of Pennsylvania fuel marketers and oil refiners filed a formal protest to the bi-directional plan, stating that Buckeye has not shown that its bidirectional proposal is workable in practice.

Meanwhile, in the market, Northeast region refinery production rates dipped to the lowest mark seen since 2012, according to EIA data, when capacity rates reached 60% for the week ended Feb. 22.

A combination of refinery maintenance – both planned and unplanned – as well as strategic run cuts were likely behind this lower rate. OPIS notes that, since that time, utilization rates have climbed, as maintenance has wrapped up this spring. 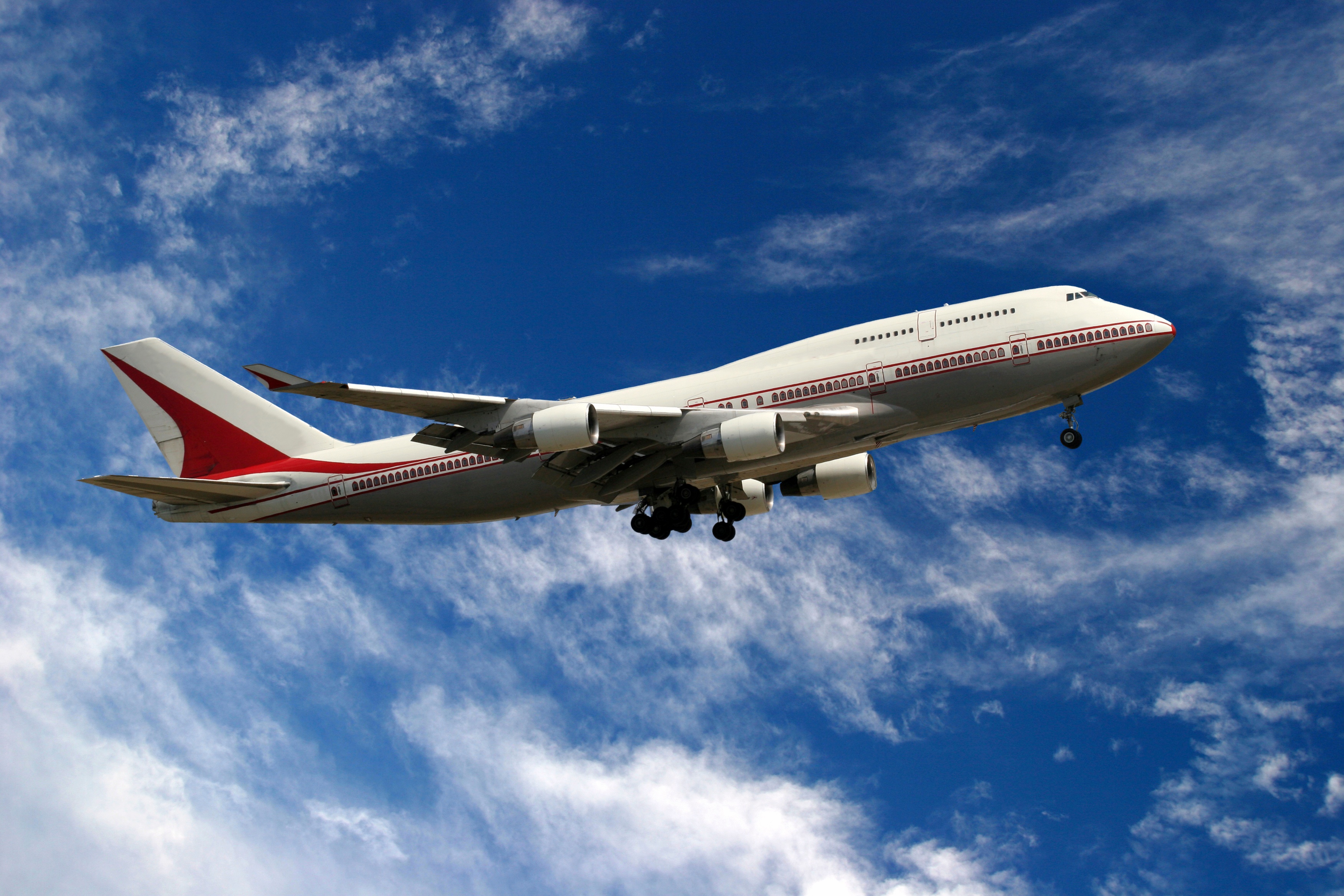 Much media coverage of sky-high gasoline prices was seen this spring, but West Coast jet fuel and diesel also rallied.

West Coast market sources said that lingering refinery issues steadily drew down the region’s jet fuel stockpile. For the week ended April 26, PADD5 jet fuel stocks posted a solid 700,000-bbl drop, down to 8.8 million bbl, and more than half a million barrels below the year-ago level at 9.5 million bbl, the U.S. Energy Information Administration said in its weekly report on May 1.

West Coast jet imports also steadily retreated by late April, totaling less than 1 million bbl a week, down from their four-week average of about 1.3 million bbl, according to the same EIA report.

Meanwhile, California and Pacific Northwest cash diesels’ differentials also received a boost. Prompt L.A. CARB diesel was at one point in April assessed at plus 20cts/gal to NYMEX ultra-low-sulfur diesel futures, which marked the strongest since September 2012. In terms of outright prices, however, they were only at the highest since late October of last year.

Total PADD5 distillates stocks totaled 12.3 million bbl for the week ended April 26, a 1.4 million drop from the previous week’s 13.7 million bbl, and they now switched to a 600,000- bbl deficit from the year-ago level, EIA data showed.

Ready for more price insight from the spot markets? Check out this free OPIS special report. 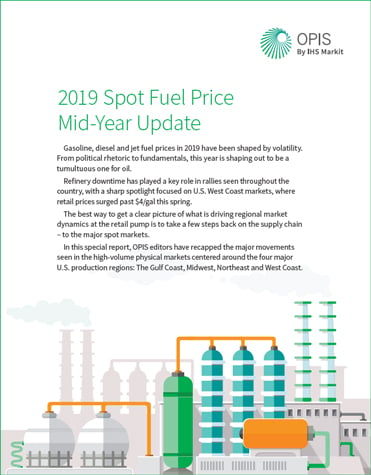 A lot has happened since the beginning of 2019 in the spot gasoline, diesel & jet fuel markets in the U.S. Gulf Coast, Midwest Northeast & West Coast. Download this free OPIS Special Report for  market-by-market  analysis.