A new report on the top retail gasoline and diesel chains in the country showed surprising results. Here are some highlights.

Te report was geared toward helping retailers – of any size – understand the effectiveness of their strategy and opportunities to improve their margins, volumes, and overall bottom line.

How Is Gas Station Price Data Collected? Who Was Top?

Volume estimates were based on market share from both fleet card transactions as well as foot-traffic data that comes from tracking nearly 120-million cell phones.

Through a partnership with a location-based data tracking company, OPIS geo-fenced every fuel station in the U.S., and market share was determined by seeing when cell phones pinged on each location.

While the rankings have changed from previous years, the top 10 chains remained mostly unchanged, with the one exception being Maverik which leapt 5 spots in 2019 to find itself in that coveted top-10 grouping.

Based on the number of sites operated, it is no surprise that 7-Eleven, Circle K, and Speedway had the highest total volumes – however despite the size of their operations, it was a major surprise that only one of those chains landed in the top 10 of the rankings, and the other two didn’t crack the top 20. 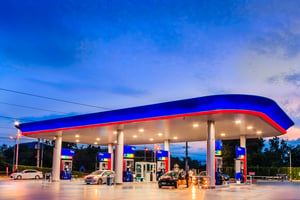 Volume estimates per station was another story, with Buc-ees dominating the competition and more than doubling the number two chain’s estimated site volumes.

The report graded chain performance by looking at average localized market share, which was a one-mile radius around each site in an urban setting, or a three-mile radius if the store was in a rural area.

Based on cell phone pings, Buc-ees was also top dog with an eye-popping market share of 71%.

When it came to chains with the highest margins, those with a West Coast presence scored the best. California-based Loop, with 23 sites, had an average margin in 2019 of a whopping 57.2cts/gal.

Oregon-based Space Age was the most aggressive with its pump price, pricing its stations 18.4cts/gal below its competitors on average in the communities in which it operates.

Chains that saw some of the highest estimated profits per site included Loop, Alltown Markets. Terrible Herbst, Twice Daily Convenience, We Got It, East Side Food Mart, My Goods Market, Henny Penny, Sheetz, Wawa, and Fastrac.

Meanwhile, Loop, Rotten Robbie, Extra Mile, We Got It and Bolla Market had sites in places where the home values were the highest. On the other hand, Pete’s, Double Kwik Markets, Jordan’s Kwik Stop and Hop In Food Stores were in communities with the lowest home values.

Dandy Mini Marts, Minit Mart of PA, Beacon & Bridge, and Little Generals faced the fewest number of competitors on average in their areas, while Sam’s Mart, Oncue Express, Tom Thumb, and Gate faced the most.

Based on the 120-million cell phones being tracked, Kwik Trip had the highest winning percentage in head-to-head efficiency when they went up against other chains in the same community.

Over 275 chains were ranked in more than 15 separate categories, with estimated profit per site weighted the highest towards the overall rankings and total estimated profits weighted second highest.

Other categories that were included in the total score were foot-traffic efficiency, estimated rack-to-retail margin, overall market share based on both fleet cards and cell phone tracking, market share in a 1-mile radius of the chain’s site, win percentage in head-to-head battles and price differentials.