Refinery Mixology: What's in Your Gasoline?

Wait, did I read that right?

Yes, you did. Refiners, by and large, don’t make the finished material that takes us from Point A to Point B when we put it in our cars.

Bit of a mouthful. We’ll be calling them CBOB and RBOB from now on.

To these blendstocks other liquids are added to make the substances that fuel our carpools, take us to grocery stores and get our families to their summer vacations. And, mostly, that final mixology does not happen at the refinery level.

This blog explores the basics of the gasoline recipe.

OPIS just recorded a new Crash Course podcast taking you through a 101 of refining gasoline and distillates and explaining the ins and out of major refining units. Check it out right here.

The Mixers: CBOB and RBOB

To reiterate, most of the gasoline produced by refineries is actually unfinished gasoline or gasoline blendstock.

Blendstocks are blended with other liquids, such as ethanol, to make finished gasoline.

Most of the finished gasoline in the U.S. contains 10% ethanol.

The blendstocks are a mix of components such as butane, reformate and FCC gasoline, which can be combined in different ways to reach needed specifications. Find out more about what the FCC does in our OPIS Crash Course podcast.

CBOB is a blendstock that’s combined with ethanol to get E10 gasoline.

RBOB becomes reformulated gasoline (or RFG) after blending with ethanol.

But why are there two and what’s the difference between them?

RFG is required in certain areas to reduce smog per Clean Air Act amendments. To provide an idea of scope, about 30% of U.S. gasoline is estimated to be RFG. And here’s a map to show you exactly where:

As you can see, many of the RFG areas are in the mid-Atlantic and Northeast. So, OPIS spot market editors see a lot more RBOB trading in the New York Harbor region.

In the Gulf Coast spot market, CBOB tends to be the most liquid product because there are fewer areas requiring RFG in that region.

You can’t have a cocktail without alcohol. In this case corn alcohol, aka ethanol.

The use of ethanol is largely linked to the advent of the Renewable Fuel Standard (RFS) program, which Congress enacted to reduce greenhouse gas emissions, expand the U.S. renewable fuels sector and diminish U.S. reliance on imports. Here’s a recent blog on RFS.

Ethanol isn’t blended into gasoline blendstock at the refineries, largely because ethanol can’t be transported through pipelines. It would damage them. Strong stuff!

Instead, ethanol is most often blended in at the rack, closer to its ultimate destination. That’s why you’ll often see ethanol listed along with gasoline and diesel in rack prices.

RVP measures the volatility in gasoline and is subject to seasonal mandates. So, blending ethanol can be complicated during summer months, when people are looking for lower-RVP gasoline.

And what’s a cocktail without a kicker?

Sometimes, detergents or other additives are blended into gasoline before it hits retail stations -- those additives are a way that fuel brands differentiate themselves with customers.

Looking for what precise mix of gasoline is required in your neck of the woods? Check out the OPIS 2019 Fuel Regs & Specs Handbook. 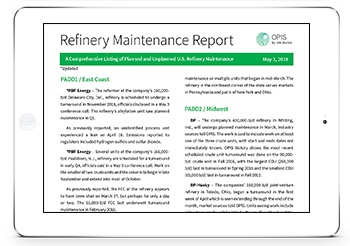 Get breaking news on unit upsets and a complete picture of turnaround plans, along with commentary that puts it all into context -- so you can react quickly and effectively.