What's Next for Mexico Gasoline and Diesel Fuel Storage

Mexico is poised to make a dent in a major challenge facing the transportation fuels market – terminal storage capacity.

This situation is developing as the market approaches the five-year anniversary of energy reform and as a new president is inaugurated.

In much of the world, fuel tanks, pipes and truck racks are so pervasive they almost escape notice. But in Mexico, the lack of that necessary infrastructure in the supply chain for gasoline and diesel has been a roadblock in the move away from one-party fuel supply to a free and competitive market.

But Mexico’s storage landscape is beginning to change. By the end of 2020, new-build clean products terminal capacity for just those projects with announced completion dates will top 15.5 million barrels, almost doubling the land storage currently held by Pemex. If all 63 projects being tracked by the Secretaría de Energía (SENER) were to be built, total new capacity would exceed 45 million barrels.

Many international companies have responded to Mexico’s invitation to supply jobbers and retailers directly (in addition to PMI, the trading arm of Pemex), and modest third-party volumes of refined products have been entering Mexico by truck, rail and small tankers.

But in order to improve economies of scale and smooth product flow, those major oil companies, refiners and global trading houses need significantly more storage. In addition, Mexico is requiring market participants to hold extra product reserves in case of supply interruption. Many have signed long-term contracts with major infrastructure development companies that are building new terminals, some of them providing more than a million barrels of capacity each.

New-build terminal projects, for which timelines are known, added 1.11 million barrels of storage in 2018 and will increase about sevenfold in 2019. The addition of 6.81 million barrels in 2020 puts the total at 15.67 million. About two-thirds of that new storage capacity will be at marine facilities unloading tankers, with the remainder located inland.

Attendees of OPIS Mexico Fuel Week in Mexico City, Oct. 22-25, 2018,  received updates on some of those projects as well as perspectives on the progress and remaining challenges of reform and course changes possible under President Andrés Manuel López Obrador (AMLO).

Uncertainty abounds amid the presidential handoff from reform architect Enrique Peña Nieto to leftist political veteran López Obrador, whose position on reform is so far less clear than his pledge to make Pemex strong again.

High on downstream observers’ list of concerns is how López Obrador will handle Mexico’s pricing strategy. His campaign promise to keep fuel prices low after he takes office could require excise tax decreases or subsidies if liberalized prices rose with the international market. The country’s financial constraints argue against the government taking a heavier hand with domestic pricing, but the president has the power – with support from Congress – to make changes.

Then there is the question of Pemex and Mexico’s competitive landscape. Under energy reform, Pemex was ostensibly shedding its monopoly powers as it became a productive state enterprise that would operate on a playing field that was level for all competitors.

Summit attendees wondered whether, under López Obrador, a Pemex unfettered by “asymmetrical regulation” and other restrictions so it can compete domestically will mean the company is able to sell fuel below supply cost in order to retain market share.

At the same time, some private importers are jockeying to gain a foothold in the evolving Mexican fuel market, brandishing daily price discounts to Pemex’s posted prices. For other importers, the new private fuel terminals and pipelines offer a more sustainable way to compete by lowering their supply costs.

If the rate of increase in private (non-Pemex) imports of fuel into Mexico over the last year is any indication, owners of the new terminals could be justified in the conviction backing their investment.

Pemex gasoline imports, while still vastly higher than private flows, have mostly declined through 2018. During September when third-party imports jumped by 286,000, to 1.124 million barrels, Pemex inbound shipments fell by 4.455 million barrels, to 15.186 million, their lowest level for the year.

Still, some market observers have noted a slowdown in project announcements during 2018, associated mostly with Mexico’s presidential campaign and the extended lame duck period. Construction of terminals takes about a year but, obtaining the necessary permits beforehand has taken a year at best under the current administration, according to a company with firsthand knowledge.

“We’ll need 100 days of the new [AMLO] administration to know” where the fuel market, reform and fuel price policy is headed, one infrastructure executive said at Mexico Fuel Week.

Get Your Exclusive OPIS Infographic

We've compiled a comprehensive timeline of added, approved and proposed terminal projects in Mexico to give you a clear picture of infrastructure expectations and implications. Get it free now! 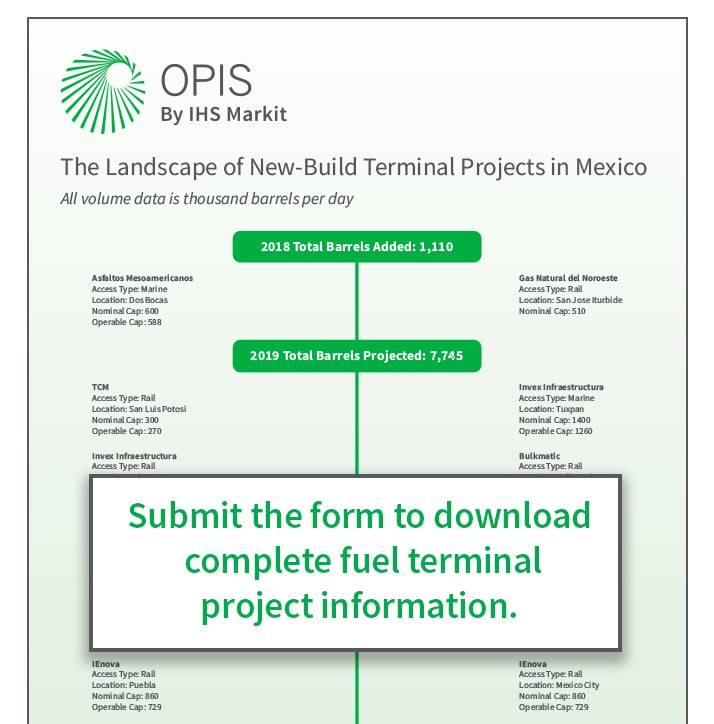