The United States produces close to 2 million barrels a day of jet fuel, and roughly half of it emerges from the refineries in the U.S. Gulf Coast production hub.

How Is Jet Fuel Priced?

Jet fuel trades in the physical spot market as a differential to a paper futures market contract. But there isn’t a jet fuel future on the New York Mercantile Exchange, so jet fuel trades versus a “cousin” distillate – NYMEX Ultra-Low-Sulfur Diesel – as a baseline.

So, for example, if jet fuel trades at -5cts/gal, that would mean jet fuel is trading at a five-cent discount to NYMEX ULSD.

Then, there are additional costs built in for transport, taxes, etc. for the jet fuel to reach its final destination.

You can find out more about how jet fuel trades – and how IMO 2020 could shake the supply chain – by listening to our latest podcast, right here:

How Does OPIS Cover Jet Fuel in the Spot Market?

U.S. jet fuel trades throughout the day in the spot markets and that’s how long OPIS covers jet fuel trading – all day.

We believe our market assessments are more accurate by capturing all the price volatility (warts and all!) caused by shifting fundamentals that can send prices spiking or plummeting. Our market coverage is from 9 a.m. to 5:15 p.m. ET every single trading day. In the New York Harbor spot market, we start coverage a little earlier, running from 8am to 5:15pm ET.

This video helps explain that:

Jet fuel price fluctuations can be caused by demand patterns specific to this commodity. Jet fuel demand tends to be seasonal.

For example, as of this writing, we are past Labor Day weekend. So, it’s expected that jet fuel demand will fall off for about eight weeks because it’s a bit of a slower travel period between the summertime and winter holidays.

Jet fuel differentials in September and most of October should show weakness and start to fall below ULSD, something that has already started happening.

However, as colder weather approaches, Latin America and Caribbean travel increases (usually in late October through February), which gives demand a boost.

Jet fuel is produced in the distillation units of a refinery and then treated in hydro-treating units. So, OPIS jet fuel editors are always on the lookout for reports of issues with these units.

Recently, ExxonMobil’s Baytown plant in Texas had a fire and that sent jet fuel differentials higher.

But, the spike didn’t last. When Hurricane Dorian hit the Southeast, it reduced fuel demand, which led to product inventories in the Gulf Coast building up. This, then, forced refiners to cut prices.

On top of that, since then, there have been some more jet fuel imports coming into the Northeast, and Baytown is back up. So, jet fuel distillates are back down to below NYMEX level.

If this seesaw of supply and demand is a subject that piques your interest, we’ve hosted a webinar on OPIS’ U.S. Gulf Coast full-day refined products coverage. To get an insider view of how we cover jet fuel, gasoline, diesel and more, listen on-demand now.

Learn More in a Free Webinar 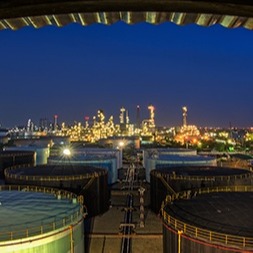 We break down the elements that influence fuel supply and price so you'll better understand the  gasoline, jet fuel and diesel markets.