*Editor’s Note: Hurricane Sally is expected to make landfall late tonight or Wednesday along the Mississippi-Alabama coast. As of 2 PM ET on September 15th, OPIS has confirmed that Phillips 66 has shutdown its 269,140 b/d Alliance refinery in Belle Chasse, Louisiana. Though not confirmed by Chevron, marekt source tell OPIS that Chevron has shut the 375,200 b/d Pascagoula refinery, while the terminal was shut on Monday September 14th.

This Atlantic Hurricane season has been one of the most active on record and there is still another two months or so before the season officially comes to a close. With 19-25 named storms, 2020 has the potential to be a repeat of 2012 when there were 19 named storms.

Precautionary shutdowns at refineries in Lake Charles, Louisiana and the Beaumont-Port Arthur, Texas area ahead of the Laura’s arrival brought down some an estimated 2.65 million b/d of refining capacity in the region. Lake Charles accounted for about 850,000 b/d of that off-line capacity though it should be noted that the 137,000 b/d Calcasieu refinery had been idled earlier in the summer due to weak demand and low margins.

The larger chunk of the downed capacity was in the Beaumont, Port-Arthur area, with the country’s largest refinery, Motiva’s Port Arthur (607,000 b/d) shutting down ahead of the storm. According to the OPIS Refinery Maintenance Report, there was roughly 14% of total U.S. capacity shut down ahead of Hurricane Laura.

The Beaumont-Port Arthur area of Texas was largely spared from the worst of Hurricane Laura. Refineries there were in various stages of restart less than a week after landfall, with only utility constraints holding back refineries there getting back to planned output rates. Two of the four plants, ExxonMobil Port Arthur and Motiva Port Arthur, had restarted most processing unites before the end of the long Labor Day weekend.

The 440,000 b/d CITGO Lake Charles refinery and the 273,000 Phillips 66 Westlake refinery, along with the already mentioned 137,000 b/d Calcasieu refinery were not as lucky as the other refineries that were in Laura’s projected path. Those three refineries downtime will ultimately be measured in weeks and not days like the others as high winds devastated the region.

Before restarts are even considered, utilities need to be back up and running and the “lights turned back on” and that may not happen until the end of September, beginning of October. That means that there is time to work concurrently and repair any damages to the refineries so the opportunity to begin restart operations is there once electricity is restored.

The cooling towers at the CITGO refinery sustained “significant damage,” sources close to refinery operations said, as did the other refineries in the area.

There may not necessarily be a need to rush repairs, but the downed refineries do want to be prepared to start producing product even though refining margins are considered poor at best. Outside of the refineries that remain down there was little impact to other infrastructure as the product pipelines continued to operate, leaving multiple southeastern terminals breathing a sigh of relieve. That also reduced the need any states to request RVP waivers from the EPA, which has happened from time to time after storms and other events.

A roughly 850,000 b/d of downed capacity for several weeks under different circumstances may have elicited a different market reaction. However, that is not the case in 2020 as refiners look to find a supply and demand balance in light of the coronavirus disease 2019 (COVID-19) pandemic.

On a more local level, gasoline supplies in PADD 3 are also considered comfortable as Gulf Coast storage levels has spent much of the summer between 87-91 million bbl. The next few weeks should lead to more draw downs, but that is more of a function of terminals pushing out low RVP gasoline aggressively.

The market reaction to the refinery shutdowns in light of pandemic-inspired demand reductions may have been a microcosm of 2020 and the odd events. Or more fittingly, “buy the rumor, sell the fact.” Leading up to Hurricane Laura’s landfall RBOB futures gained 11.18cts on August 24-25, but the following two days August 26-27, RBOB futures dropped 11.14cts as the market rationalized the limited scope of damage the hurricane had on refineries as well as the surplus of supply that exists.

One thing that appeared apparent was some of the spare capacity that had either been idled or reduced wasn’t going to start “chasing margins” once the market started to turn higher. That was likely a prudent move and while the RBOB-WTI crack spread on the screen jumped to more than $15/bbl, just a few days later the “paper crack” was closing back in on single digits.

Gulf Coast CBOB is worth about $45/bbl and ULSD just under $44/bbl, refining margins on the Gulf Coast are weaker than what the futures market implies.

While there was a quick pop for refiner margins, one area that continued to see strong margins was the rack-to-retail environment. Jet fuel is the unwanted hydrocarbon right now with spot values at less than $1/gal. 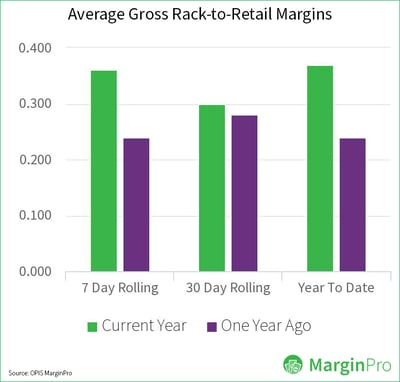 Based on the most recent data from OPIS MarginPro, as of September 8th the average gross margin on a year-to-date basis stands at 37cts/gal, last year at this point the average margin was some 50% lower at 24cts/gal. Though 2020 had its share of twists and turns arguably the one constant throughout this year has been steady to strong rack-to-retail margins. Several public retailers have recently noted that high margins have more than made up for lost volumes at their sites.

The market is also entering a period where there is a typically a “big inning” for rack-to-retail margins. However, with margins already elevated, it may be difficult to squeeze out too much more or at least something that resembles the spike that has been evident during a summer grade to winter grade gasoline transition.