What do diesel conditioning systems, cold brew coffee and EV chargers have in common? They were all among the hottest products featured at retail fuel and convenience industry trade shows throughout 2018.

We’ve condensed a year’s worth of expos into a dozen highlights for gas station managers, convenience store operators and more. If your fuel operation has been on the nice list this year, look no further than this list for the perfect holiday treat!

Veeder-Root is developing an in-sump diesel fuel conditioning system to remove water and prevent microbial growth. A filtration system removes water from the fuel in a two-step process. The filter needs to be changed every six to 12 months and can be performed while doing an inspection. The system is expected to be commercially available next spring, reps said.

Franklin Fueling Systems was exhibiting a similar system called the Corrosion Control System. In the tank, a fuel-water separator suctions the tank bottom, and in the sump, a moisture control pack absorbs humidity. A  sensor detects a corrosive atmosphere in the sumps or tanks, as well as humidity inside the sump, and alerts stations when the moisture control packs need replacing, Franklin says. 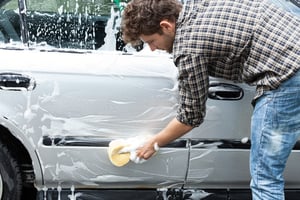 Though interest in food service overtakes all other potential diversifications, the car wash business could catch up. Just recently, the workshop “Your Next Big Category: The Car Wash” was so packed that NACS staff had to cut off admittance.

The Fuels Institute sees plug-in electric vehicles as a niche segment unlikely to seize a large share of the U.S. new vehicle market anytime soon. But John Eichberger, the institute’s executive director, said government incentives supporting EVs will eventually go away, and it may make sense to at least pilot EVs in a metropolitan store where there may be demand.

Some of the industry’s pioneers in alternative fuels are dabbling in EV charging stations, partnering with several charging networks – such as Electrify America, EVgo and Tesla – that require the merchant to provide only a couple of parking spaces.

Dispenser-maker Gilbarco Veeder-Root announced that it had made a minority investment in Tritium, a privately held EV charging manufacturer, and displayed a fast-charging unit at its NACS exhibit.

4. Cars Getting Connected to Pay for Gas

Technology vendor P97, which offers a leading mobile payment platform, teamed up with Honda and Phillips 66 at this year’s NACS show to exhibit a payment system for fuel using the vehicle’s infotainment system.

In-dash payment has made strides. General Motors, which also uses P97’s technology, has partnered with several major oil brands to allow payment for fuel over its Marketplace In-Dash system.

Shell is likely the furthest along among majors in a partnership with GM. In August, it rolled out in-dash fuel payment nationwide for GM vehicles equipped with Marketplace. Except for pumping gas, the transaction is handled inside the vehicle.

Biometrics technology seems to be gaining traction for identification. At one regional trade show, at least two firms were exhibiting equipment using facial recognition – one to make ordering food faster and the other to identify potential shoplifters.

Siment Digital Media, of Mauldin, S.C., supplies interactive digital displays that can be used as menus for ordering food.

BP showed off another form of biometrics at its show for branded marketers: Motorists pay for fuel with the swipe of their palm.

There’s still plenty of talk about mobile payment at the pump but going cardless is also trending at ATMs, said reps for Payment Alliance International.

Consumers can use their cellphones to withdraw cash with a bank authorization code. Just select “cardless service” and insert the code.

The systems are primarily valued as a coaching tool. Most video safety systems provide a road-facing camera and some also include a cab-facing camera.

SmartDrive allows customers to deploy more cameras for a 360-degree view and insight into risky driving behavior. Some 35% of collisions are side and rear incidents, the vendor said. SmartDrive said the cameras can reduce collision frequency by more than 50%. Its data shows that 69% of incidents involve speeding; 59%, distractions; 74%, fatigue; and 75%, unsafe following.

After depositing cash throughout the day, the store manager can hit a button to close out the safe. An armored car company can be alerted to pick up cash and provide change one, two or more times a week, depending on store volume.

Marijuana sales garnered plenty of interest at the NACS show.

At the time of the show, NACS pointed out that nine states plus the District of Columbia allowed recreational use of marijuana and more than 30 allowed medical use. Cannabis is illegal at the federal level.

NACS offered a session on how convenience retailers can legally benefit by offering accessories for pot smokers.

Now convenience stores are getting into the bottled cold brew products, Royal said.

You’ve heard of grab-and-go food but maybe not “grab-and-grill” meats.

Meat vendor Prime House Direct offers a variety of “restaurant quality” steaks, beef patties, chops, chicken breasts and shrimp in individually vacuum-pack portions that are “grill ready.” The meat can be displayed in a chest or upright case.

The product delivers a 30%-40% markup, according to literature.

Some packaging got smarter; some even got “greener.”

For instance, a new type of cup called the “ButterflyCup” eliminates the need for lids and straws and it is 100% compostable and recyclable. There’s a patent on the seal, which also is said to eliminate splashes, leaks and drips.

Other clever containers for snacks are designed to fit perfectly in a cup holder, such as Campbell’s Well Yes! Soup, which are 200-calorie soups made to sip on the go.

Try Oil Express free for 2 weeks for coverage of all the biggest trends for gas stations, petroleum marketers and convenience stores today!

Oil Express has been the leading source of U.S. petroleum marketing news, practical advice and analysis  for over 40 years.