2019 Gasoline and Diesel Prices by Market

Oil price futures are poised for a volatile 2019, if the end of 2018 is any indication.  What will that mean for gas and diesel prices at the spot and wholesale level?

Plus, click on the OPIS Crash Course episode right here to listen to top takeaways from the U.S. spot fuel markets.

In the year that was, prompt WTI crude oil never settled below $50/bbl – that is, until the very end of 2018. As the equities market staggered lower, WTI and Brent crude oil prices plunged, only to whipsaw higher as the market clawed its way back up.

Still, the damage was done to the oil complex and the stage is set for a tumultuous year.  That stands to pull gasoline and diesel futures along for a roller coaster ride. Those moves will take their toll on what you pay at the pump.

Want to read a mid-year update of this blog post? Click here to see what our editors were tracking as the halfway point of 2019 loomed.

Remember, the price you pay for gasoline and diesel at the retail level starts higher up the fuel chain.

The actual fuel that is produced in a refinery is priced at a premium or discount to that futures market. That so-called spot price is then used to derive the value wholesalers pay at one of some 400 rack markets across the United States. The rack price then influences the price paid by drivers at the retail level.

So, to grasp what is making a local fuel price go up or down, it is important to understand what’s happening at the spot market most closely associated with it. Here’s a map to give you some geographical reference. 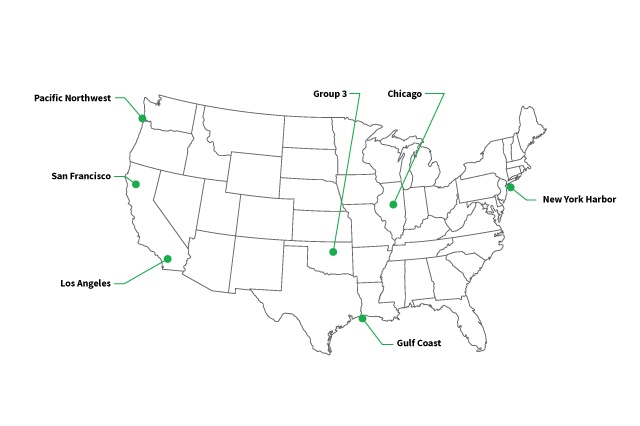 Each of those spot markets has its own unique characteristics, advantages and challenges. For some regions, the advent of an open market in Mexico will shape 2019 pricing. For many markets, the coming of low-sulfur fuel requirements for ships in 2020, as decreed by the IMO, could be a major game changer.

Our spots editors pulled together the top trends that will steer prices in their markets during 2019.

Keep it tuned to OPIS during all of 2019 to see how your market unfolds and how the fuel price moves at the futures and spot level translate to what you pay at the wholesale and retail level.

Want to stay fresh on market trends even if you are pressed for time in 2019? Subscribe free to our OPIS Crash Course podcast! Click below to be taken to the Crash Course homepage and subscribe via your favorite podcast channel!

Fuel your business decisions this year with instant access to oil industry news and price alerts. From in-depth market analysis, to developments related to oil majors, to breaking news about unit upsets, you’ll learn about it immediately from OPIS.